There went a fame in Heaven that he ere long,

Intended to create, and therein plant,

A generation, whom his choice regard,

Should favor equal to the sons of Heaven:

Space is big. You just won’t believe how vastly, hugely, mind-bogglingly big it is. I mean, you may think it’s a long way down the road to the chemist’s, but that’s just peanuts to space.

Douglas Adams, The Hitchiker’s Guide to the Galaxy

I suppose, after talking about Earth and earth yesterday, there’s a certain logic to today having a look at the word space. Like earth, it’s got two very different levels of meaning, which are still quite similar.

END_OF_DOCUMENT_TOKEN_TO_BE_REPLACED

One of my favourite fictional examples of communication issues between two people speaking different languages is in the 1991 Star Trek: The Next Generation episode “Darmok.” A quick synopsis: the Federation wants to open dialogue with a secretive race known as the Tamarians, but when they arrive at their planet they run into the slight problem of neither understanding the other’s language. Captain Picard is beamed down to the planet, and together with his Tamarian counterpart, they must find some way to communicate to survive in a harsh environment. END_OF_DOCUMENT_TOKEN_TO_BE_REPLACED

Did you watch Westworld? Enjoy all the twists, and the accompanying guesswork about who might secretly be a…. host? I wanted to write robot there, but a few episodes into the series I noticed that none of the characters seemed to have used the word robot, and I guessed that over the course of the season none of them would (I wasn’t paying very close attention to see if anyone did or not, but I don’t recall noticing the word). Which might seem a little odd, because it’s a series all about robots. Cowboy robots. Most of the characters we see are robots. And they meet the criteria according to the two definitions in the OED:

But they’re always referred to as hosts. But then, that doesn’t really seem that odd. Because it’s prestige television, and robot isn’t really a prestige word, is it? And I don’t mean to be critical of the producers’ attitude, because I understand their aversion to the word. Because robot just sounds a bit silly, doesn’t it?

It shouldn’t, because it’s a perfectly legitimate word that describes real-life machines that make a lot of our favourite products. But when you hear the word robot, you probably don’t picture this: END_OF_DOCUMENT_TOKEN_TO_BE_REPLACED

With this being the 50th anniversary of Star Trek, the latest film opening tomorrow, and every episode of every series now on Netflix (The Next Generation Season 2 Episode 16, Q Who? is currently playing in another tab), I thought it time to share some thoughts on this venerable cultural institution.

I love Star Trek, and even if across all six series and thirteen movies, the quality can vary, I’ll always love the idea of Star Trek. I was always aware of the classic series and its films as a child, but I only got to watch Star Trek when The Next Generation started on TV (Saturday nights on Network 2, though I’m sure it started on Irish television later than its 1987 debut, as I wouldn’t have such a strong memory of it if I had been four when it started). Though I was always fascinated by science-fiction and fantasy, I think I as a little daunted by Star Trek as it seemed so grown-up. As a child my older brother was always more of a fan and I clung to his coattails a little: fascinated by the idea of a ship flying around space and having adventures, but also a little put off by how serious it all seemed to be. It was only in my teens that I began to really appreciate it. END_OF_DOCUMENT_TOKEN_TO_BE_REPLACED 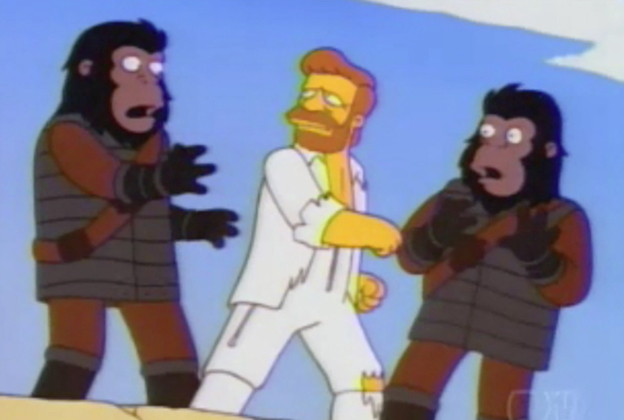 —Have you seen the new Monkey Planet film?

—Monkey Planet! You know the ones with the talking monkeys. That guy’s in this one, what’s his name, James Franco. It’s pretty good.

—Yeah, you know the first one, it’s from the 60s, with the astronauts and they crash land on a planet with talking monkeys!

—Monkey Planet, it’s a classic, how do you not know it!

How many of these films would you like to see (Battle for the Monkey Planet sounds like it could be good fun to be honest)?

They might all sound like fun, but aren’t they lacking the grativas of the title Planet of the Apes? It’s a good thing that the film’s producers went with that title then. But that wasn’t always the case… END_OF_DOCUMENT_TOKEN_TO_BE_REPLACED