There went a fame in Heaven that he ere long,

Intended to create, and therein plant,

A generation, whom his choice regard,

Should favor equal to the sons of Heaven:

Space is big. You just won’t believe how vastly, hugely, mind-bogglingly big it is. I mean, you may think it’s a long way down the road to the chemist’s, but that’s just peanuts to space.

Douglas Adams, The Hitchiker’s Guide to the Galaxy

I suppose, after talking about Earth and earth yesterday, there’s a certain logic to today having a look at the word space. Like earth, it’s got two very different levels of meaning, which are still quite similar.

END_OF_DOCUMENT_TOKEN_TO_BE_REPLACED 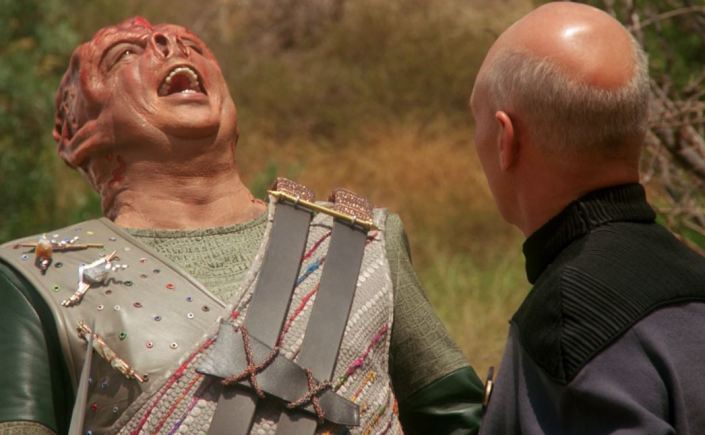 One of my favourite fictional examples of communication issues between two people speaking different languages is in the 1991 Star Trek: The Next Generation episode “Darmok.” A quick synopsis: the Federation wants to open dialogue with a secretive race known as the Tamarians, but when they arrive at their planet they run into the slight problem of neither understanding the other’s language. Captain Picard is beamed down to the planet, and together with his Tamarian counterpart, they must find some way to communicate to survive in a harsh environment. END_OF_DOCUMENT_TOKEN_TO_BE_REPLACED

With this being the 50th anniversary of Star Trek, the latest film opening tomorrow, and every episode of every series now on Netflix (The Next Generation Season 2 Episode 16, Q Who? is currently playing in another tab), I thought it time to share some thoughts on this venerable cultural institution.

I love Star Trek, and even if across all six series and thirteen movies, the quality can vary, I’ll always love the idea of Star Trek. I was always aware of the classic series and its films as a child, but I only got to watch Star Trek when The Next Generation started on TV (Saturday nights on Network 2, though I’m sure it started on Irish television later than its 1987 debut, as I wouldn’t have such a strong memory of it if I had been four when it started). Though I was always fascinated by science-fiction and fantasy, I think I as a little daunted by Star Trek as it seemed so grown-up. As a child my older brother was always more of a fan and I clung to his coattails a little: fascinated by the idea of a ship flying around space and having adventures, but also a little put off by how serious it all seemed to be. It was only in my teens that I began to really appreciate it. END_OF_DOCUMENT_TOKEN_TO_BE_REPLACED