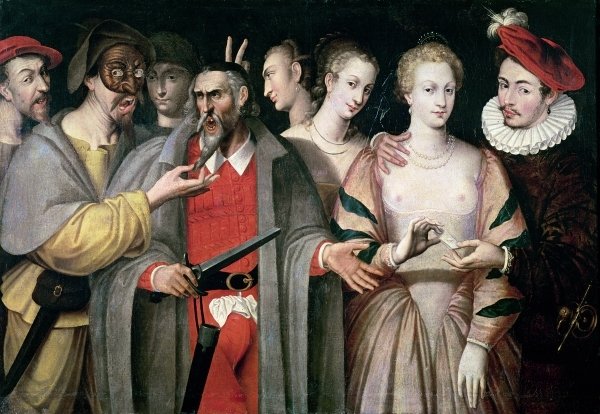 Cuck seems to be the insult du jour, especially since the American presidential election. It’s primarily used by members of the alt-right movement, though I’m loathe to dignify those who identify themselves so with anything approaching membership of an actual political movement. The alt-right claim that they’re offering an alternative to traditional conservative politics in the United States, but to be honest, they just seem to me to be a formless mass of vaguely-connected misogynists, racists, and people who generally seem to be unhappy with themselves, and project that self-loathing outwards. All that seems to unite the alt-right is hatred.

The word seemed to initially have been picked up by misogynistic (excuse me, “masculinist:” hah!) sites like The Red Pill and Return of Kings, along with all the other nasty, toxic little terms they’ve thought up to spread their hatred. I could do a whole other post all about the specific vocabulary they’ve developed to describe how they hate women, and despise what they see as passive men who enable women’s wicked ways, but I really don’t want to go down their seedy little rabbit hole.

I can understand why sites like these would latch on to cuck as an insult. As they see the world as one in which women control and manipulate men with sex, a passive man whose wife is promiscuous and unfaithful is the worst a man can be. He’s letting her get away with it! And of course it’s inherently misogynistic in that it’s based on a woman’s infidelity (it’s strange that the “masculinists” don’t seem to have an insult for an unfaithful man). And it just sounds like a nasty little word. It’s so harsh and blunt. And it sounds a lot like cock and fuck, which I think explains some of its base appeal for those who use it. Though with most accents, it also sounds a hell of a lot like, if not identical to, cook. But I don’t think alt-righters like to think about that too much.

What’s curious though, is that a term that’s so explicitly wrapped up in gender politics has become a general insult. For all the alt-right’s pretensions to be seen as a genuine political movement, its love of the word cuck seems to betray the fact that its heart is still in these websites where men blame women for their own perceived shortcomings. Why else would one refer to a political opponent as a betrayed husband? With the presidency of Donald Trump, the word probably won’t go out of fashion for a while. Actually, I could even imagine the Trump himself using it in one of his 3am tweets. Unless someone finally gets it through to him that the President of the United States isn’t supposed to be engaged in petty spats on social media.

If you’re tired of the word, or even worse, if someone calls you a cuck, imagine instead that they’re calling you a cook, and thank them for complimenting you on your culinary skills.

But what do I know? I’m just a Eurotrash libtard cuck. Still, I bake a mean cuckie… (I actually have [white chocolate chip], and they’re rather nice, but naturally I insist on calling them biscuits).

16 thoughts on “Too Many Cucks”