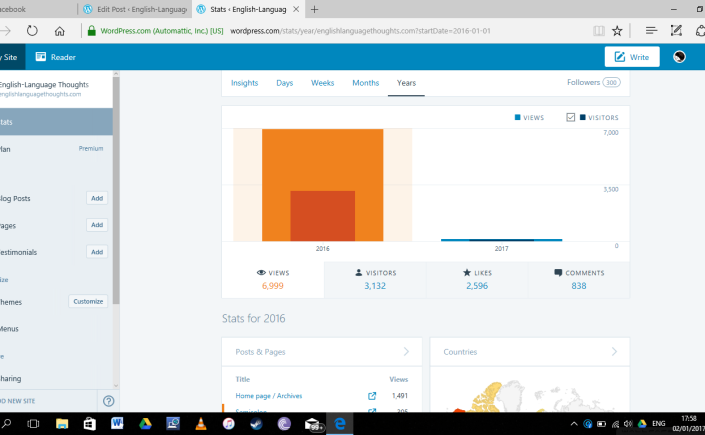 My god, what a number. Objectively, you might think it only somewhat interesting, largely, if not solely, due to those three consecutive nines. But it has a special, infuriating significance for me. Arriving home yesterday evening and going to my laptop, one of my primary thoughts was of my blog activity while I was away, a daily thought for me.

And as I was opening the laptop, a more specific thought occurred to me: having started the blog in May, I realised that the yearly section of the stats page was now slightly more interesting. Even though I’d only been blogging for six and a bit months, I was still curious to see what my final total views was. So I had as look and it was…

Now I don’t know if that’s high or low compared to the average, and I’m not really interested in that. And the 3,132 is probably the more relevant statistic anyway. But still, 6,999! Couldn’t one of you have just refreshed the page once, just to make it an even 7,000?

Perhaps I’ll try the old furniture-vendors’ trick of saying “six nine nine nine,” so I won’t think about that magic 7,000 mark so much.

In all seriousness though, I’ve no idea how or why so many people would visit my blog, but I hope that at least 3,499 of those views were interesting for you, dear reader, and I humbly thank you all for visiting, commenting, and liking. And doing so from all over the world!

EDIT: and I’ve just been informed that that was my 200th post! Maybe I’ll do a top-ten list soon…