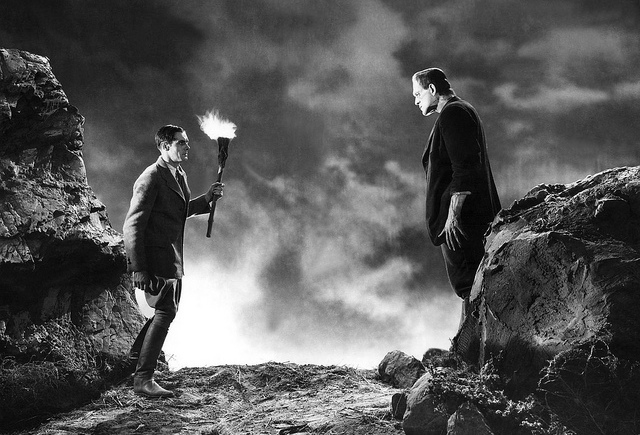 I went to see A Monster Calls on Friday night, and really enjoyed it. Without spoiling much, it was a tougher watch than I expected, but still quite beautiful and touching at the same time.

I’ve been ruminating on the word monster since then. While the meaning hasn’t changed greatly in the many years its been in use, I’ve been interested in its complexity and layers of meaning since learning something of its etymology a few years ago. It comes from the old Latin monstrum, meaning divine omen or portent. The appearance of hideous figures was believed to indicate the arrival of some great event. Monstrum is derived from the verb monere, which means both to warn and instruct. From this root also came the verb monstrare, meaning to show or point out. This word gained the prefix de-, with demonstrare meaning to demonstrate, with the prefix meaning entirely.

So while the words demonstrate and monster might seem quite different on the surface, there are some basic similarities in their individual meanings. The appearance of a monster was believed to demonstrate that something momentous was going to happen, and throughout all the time we’ve been telling stories, monsters have been used to demonstrate one thing or another, and instruct us in some important life lessons. The mythical chimera, comprised of parts of different animals (usually a lion, goat, and snake), is believed by some to have represented the Greek tripartite year. Stories about monsters which involved transformation, like vampires and werewolves, were probably coded warnings about the dark side which hides in all of us. This was made much more explicit in Robert Louis Stevenson’s Strange Case of Dr. Jekyll and Mr. Hyde (1886).

Such creatures also provided another form of demonstration: explaining the apparently bizarre occurrences that science had not yet found answers for. A belief in werewolves may have stemmed from cases of clinical lycanthropy, a rare disorder in which sufferers believe they can transform into animals. Stories about vampires probably came about as explanations for why dead bodies can appear rosy-cheeked, and hair and fingernails can appear to continue to grow post-mortem.

As monsters began to become more acceptable figures to write about in literature during the Gothic period, writers began to use them more and more to teach us about ourselves and the world. Mary Shelley’s Frankenstein (1818) is probably the first great work of monster fiction. One can find many lessons in the book, such as reflections on what it means to be human, warnings about the irresponsible application of science, or the responsibility of parents for their offspring. Towards the end of the 19th century, perhaps the most enduring fictional monster appeared: Dracula (1897). Like other works of horror fiction of the time such as The Picture of Dorian Gray (1890), and The Island of Dr. Moreau (1896), the monster here seemed to serve even more to make the reader look at themselves, with themes such as the fear of the decline of the British Empire, changing gender roles, and the emergence of more liberated sexuality evident.

As the 20th century progressed, and our monsters became more familiar on the silver screen, they still seemed to function as our teachers. The atomic horror of the 1950s evident in such films as Them! (1954), Godzilla (1954), and The Amazing Colossal Man (1957) were clear warnings about the potential dangers of nuclear power. In the following two decades though, monsters became much more recognisable and human. Norman Bates in Psycho (1960) is probably the first great human monster of Hollywood cinema. Such an apparently ordinary young man committing graphic acts of violence and demonstrating a clear mental disorder was quite shocking at the time, and began a general trend of monsters emerging from apparently normal situations. As news media made it clearer that violence can erupt from the most banal places, our monsters more frequently became troubled young men. While Norman Bates’s killings could at least be explained by his psychosis, the 70s brought us more terrifying monsters who killed for no reason.

Michael Myers of Halloween (1978) perhaps epitomises this best. A child murderer with no apparent motive, his monstrosity is emphasised by his blank mask, making him an uncanny figure blending the human and the monstrous, forcing us to confront not only that one person could murder another without motive, but the fact that this does indeed happen. His blankness is also terrifying, demonstrating how hard it is to truly know someone and their thoughts.

We’ve somewhat rehabilitated monsters nowadays, probably due to the growing popularity of Halloween among children around the world. Still, monsters retain their power to teach us lessons, if not quite frighten us as much as they used to. Again, without spoiling anything, the monster in A Monster Calls is a great example of that. And he is a bit scary.

And the word monster still retains a lot of its power. Sure, no-one’s going to be terrified of Mike and Sully, but think about what a statement it is to call someone a monster. No matter how liberally you use swearwords, it really takes a lot to call someone a monster, and there’s usually no going back from that. It mainly tends to be used to refer to Hitler and the Nazis in general, which I think is perfectly appropriate. They were monsters in the sense that they warned us about the worst of what humanity can do, and hopefully we’ve learned our lesson so we’re not doomed to repeat history.

16 thoughts on “A Monster Calls”