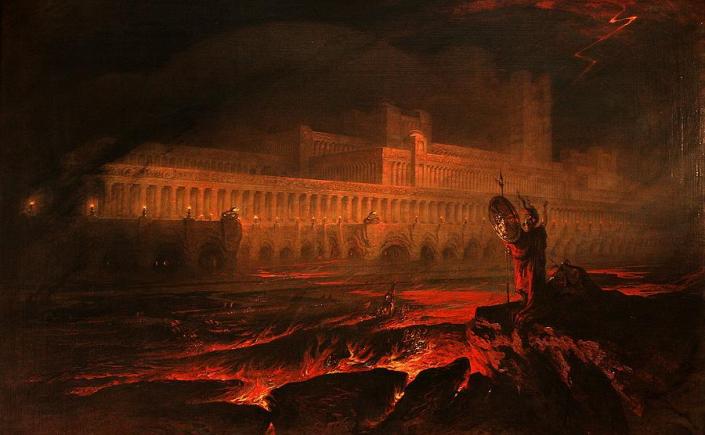 I passed a poster for an event called Pandemonium this morning (I’m not sure what the event was, so I guess it’s not a very effective poster). That’s not a word I’ve given much attention to in the past, I thought, but looking at it now, does it mean what I think it means?

(You might be thinking that I make up these little anecdotes about how I come up with my ideas. But this morning I had a couple of hours to spare so was on my way to a café to write. I didn’t have anything particular, and was going to check my ideas list, but then I passed the sign, and here we are.)

If you’re the type of person who likes to break down words to figure out their origins, you might, like I did, be able to take a guess at what it means.

The first thing I noticed was demon right there in the middle. And before that you’ve got pan, often used as a prefix meaning all. Pandemic, Pan-American Airlines, Pantheon, panorama etc. So then, I thought, all demons. Like all hell breaks loose (isn’t that from Milton’s “Paradise Lost?”). That makes sense. That’s definitely what it means! I’ll look it up to confirm it, then tell everyone!

And yes, that is what it means. And like the phrase all hell broke loose, it also comes from the 17th-century epic poem “Paradise Lost.” It’s the name of the great capital of Satan and all his demonic friends and the name is indeed a combination of pan and demon. So, pretty much as I’d guessed, which is always very satisfying.

I’m grateful then, to Milton, for giving us this great word. In fact, like “The Rime of the Ancient Mariner,” “Paradise Lost” has been very generous to the English language. Apart from all hell broke loose and pandemonium, it also gave us the phrase Better to reign in Hell, than serve in Heaven, as uttered by the rebellious Satan. Speaking of whom, Milton’s characterisation of Satan in the poem is often credited as inspiring the concept of a charismatic, sympathetic villain in later works of art. Even the title itself, “Paradise Lost,” has become a byword for nostalgia, or a loss of innocence, and has been used by many later works of fiction.

The next time then, you think it’s pandemonium at work, or at home, just be grateful you don’t have to deal with a host of demons fresh from Hell, led by Satan himself.