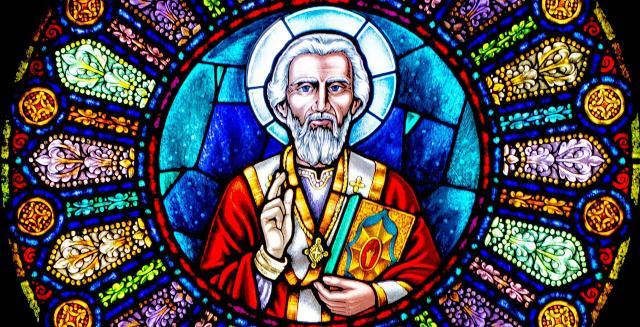 The most common name for the chap is of course Santa Claus, which comes from the Dutch Sinterklaas, in turn derived from St. Nicholas. A Greek bishop working in Asia Minor (modern-day Turkey), he became famous for a secret habit of gift-giving. Also, because of the many miracles associated with him, he also became known as Nikolaos the Wonderworker, and it’s a shame that name hasn’t remained popular.

When I was a child, I think I mostly called him Santy, though as it got closer to Christmas Day I’d get concerned that might not take to me calling him that, maybe thinking I was being too forward in calling him by his nickname, so I’d go back to calling him Santa till I got my presents. And it worked.

Of course the most notable deviation from St. Nicholas is Father Christmas, as he’s known in the UK. Why do they call him that, in contrast to the rest of us? Father Christmas had long been a personification of Christmas in British folklore, long before modern conceptions of Santa Claus. He enjoyed a resurgence in popularity in the mid-17th century after the English Civil War, when the Puritan British government under Oliver Cromwell tried to suppress traditional celebrations of Christmas. Royalist pamphleteers, in defiance of the government, adopted Father Christmas as a symbol of the good old times. As the American conception of Santa Claus began to become more popular in the UK in the 1850s, Father Christmas began to adopt many of the generous bishop’s characteristics, until soon, there were no distinctions between the two figures.

Anyway, whatever you want to call him, I hope you’ve made it onto his good list, and you don’t find a lump of coal in your stocking. Although perhaps it won’t be him bringing gifts, depending on where you’re from. For many German Catholics, and in some Latin American countries, The Christkind (Christ Child) brings gifts. In Nordic countries it’s the Christmas Gnome, though I find the idea of waking up to see him leave gifts at the end of my bed quite terrifying. In Italy, Babbo Natale comes as he does elsewhere, but good children in many regions also get gifts on the night of 5th January from Befana, a witch. Similarly in Spain, the three kings (who according to Christian belief visited Jesus and definitely went over the €5 Secret-Santa price limit with their gold, frankincense and myrrh) bring gifts on 6th January. Which is a nice way to extend the Christmas festivities (it can get boring after Christmas Day, can’t it?), so maybe we should consider some way to bring back old Twelfth Night celebrations. And invent some reason to get more gifts then too. A generous elf or something.

28 thoughts on “The Many Names of St. Nicholas”