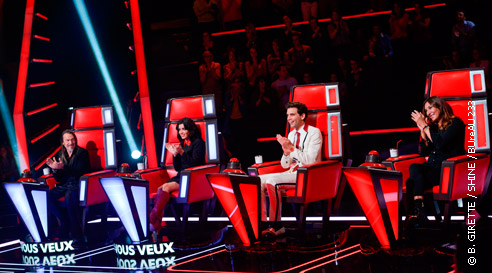 I’m generally not a fan of TV talent shows. I find that they tend to look for people who sing in an identical, overwrought style; and they can be quite exploitative of people who seem to have mental-health issues (The X-Factor particularly). Lately however, I’ve seen a few episodes of both the French and Walloon editions of The Voice.

Unsurprisingly, a lot of the hopefuls sing in English. While there is of course a great history of French-language music, there’s simply a hell of a lot more English-language music out there. If you’ve ever travelled in Continental Europe and listened to the radio, you’ll probably have noticed that there was a healthy share of music in English being played, especially on classic-rock stations.

The thing is, the level of English of the singers understandably varies. Some of them are clearly quite capable, and obviously understand what they’re singing. Others get all the words right, but something about the rhythm, and the way they stress the wrong words or mash some together, suggests their English isn’t of the highest standard. And there are a few who clearly don’t know what they’re singing at all, getting lots of words wrong, or leaving some out entirely. And I have to admit to sometimes getting a little annoyed by that. Why would I feel like that?

First of all, I don’t want to criticise them. It takes a lot of courage to sing on national television, especially in a language that’s not your first language. And I don’t want to suggest that we should only listen to or sing songs in our native tongues. And I don’t want to demand that if we do sing in another language, we learn all the words of the song. I even have trouble identifying lyrics of songs in English, but I’m more than happy to fill in the gaps with gibberish. All that’s fine for singing along to something on the radio, but when you’ve got one chance to make an impression, I expect a little more. But when I can see someone emoting with all their strength, yet they don’t understand the words they’re using, I don’t buy it. I feel like they’d be better off singing in their first language so their emotion seems genuine.

Still though, despite my attempts to rationalise my irritation, I think it’s mainly an instinctive reaction. Think about times you’ve heard people in the street speaking a foreign language, and instinctively got a little annoyed. This may not have happened to you personally (and if it hasn’t, you’re a better person than I), but it’s quite a common reaction, even for people who would never judge or discriminate against someone from another country. But I think we evolved long ago to have an instinctive reaction against anyone who’s clearly marked as an outsider, and no matter our own personal feelings, this can still kick in when we hear someone speak a language we don’t know. This is then complicated by the paranoia that they just might be talking about us! And if it happens in our own country, the sense of that person being an outsider might be even more pronounced. Some people treat such feelings as intrusive thoughts, or recognise them as unconscious reactions, while others base their thoughts or actions on them, which is why you hear people complain about them coming over here and not even speaking the language!

And I think when I hear people put English through the wringer when they sing, I have a similar defensive reaction. How dare they do that to my language!? It’s not logical, and I have no claims of ownership over English, but still, I find it hard not to have that reaction. Rest assured though, that if you’re thinking of going on the French or Walloon Voice soon, that though I might get annoyed, I would never let that reaction influence the way I treat anybody. But do try to remember that All in all in Another Brick in the Wall is three separate words. Plus, you’ll probably still do a better job than this poor woman: