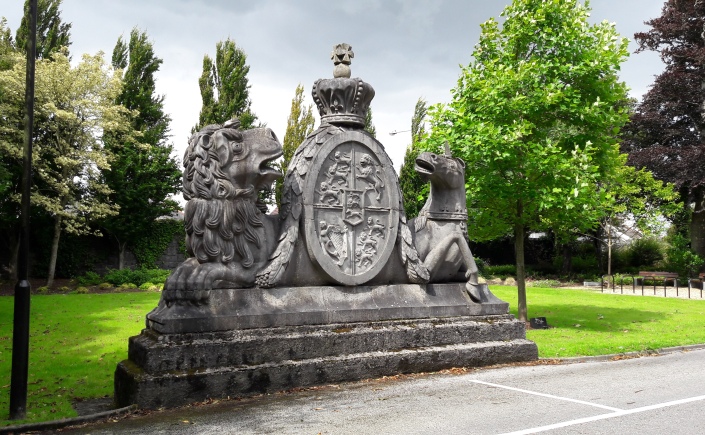 Today, you can get an idea of how my “creative” process works. On Saturday morning I was going for a run around the university here, NUI Galway. In order to ensure I met my modest distance target, I went down a little-used path, behind the old quadrangle.

There, I passed the royal coat of arms of the United Kingdom that you can see in the feature image of this article. It was removed from the County Courthouse in 1921 after Ireland gained independence from the UK, and was left in its current place.

As most Galwegians are unaware of its existence, I thought it’d be something interesting to share on Instagram and Facebook. So on Sunday I made a detour on my way into town to take a few pictures. You can see the result of this on Instagram (cross-platform social-media synergy!) over on the right (on PC) or down below (on your phone).

Say, have you ever wondered why we call a coat of arms a coat of arms, when it’s not actually a coat? And why do we call weapons arms? Why those are excellent questions: let’s explore them!

The answer to the coat question is pretty straightforward: coats of arms used to beactual coats. Or tunics, more accurately, which would be usually worn over armour, and featuring one’s heraldic arms. Arms in this sense, meaning insignia, comes from the Latin arma, which could mean weapons or armour. They got this name because they would initially be featured on armour and shields, and later, coats of arms. I suppose they were a 14th-century equivalent of a t-shirt of your favourite band or sports team.

Now, I’ve often thought that there must be a link between arm as in weapon, and arm as in that thing between your hand and your shoulder. Because you see, you usually hold a weapon in your hand, which is at the end of your arm, and in films and TV, grizzled old mentors are always telling our heroes that their weapons should be an extension of their arms. There has to be a link, it’s just too good to be…

Yup, the two meanings of arm have entirely different etymologies. Perhaps unsurprisingly, the term for the limb has a Proto-Germanic origin, and the fact that the words are identical in sound and spelling is entirely coincidental. Which is a bit disappointing really.

But the coat stuff is still interesting, isn’t it? And coats of arms are also where we get the term turncoat from, meaning traitor. Can you figure out how the word came about? Yes, a turncoat was someone who’d turn their coat inside out to hide their loyalties. Now that you’ve learned that, aren’t you glad I needed to make up that extra half an kilometre on Saturday?