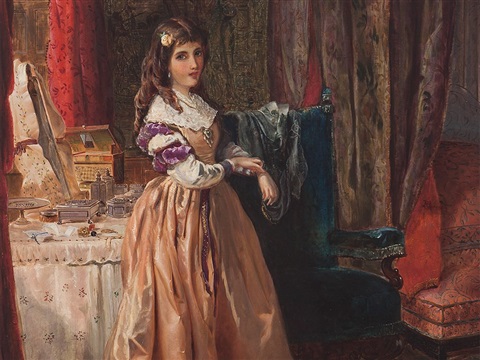 Seriously, please. After I wrote about eau de Cologne recently, a few of you referred to eau de toilette in the comments, and it’s clear similarity to the English word toilet (and in fact, eau de toilette could be directly translated as toilet water).

Toilet is a surprisingly interesting word. On the surface of course it just refers to the object that stands in your bathroom, but how and when people use it (the word, not the actual toilet) varies quite a bit around the world.

A little history first: the word toilet was first recorded in English in the early 16th century, but with quite a different meaning. It originally meant a cover or bag for clothes, coming from the Middle French word toilette with the same meaning, itself a diminutive form of the word toile (cloth, net). By the late 18th century, the word had become associated with dressing by the upper classes, referring specifically to the fine cloth cover that would be spread upon a dressing table, with objects laid upon it. The meaning of the word then gradually changed over time, soon coming to refer to the act of getting dressed. This was often referred to as making one’s toilet, a usage you can still find in many books from the 19th and 20th century.

If you were really upper class, then you not only had a very nice dressing room, but one with its own lavatory, and such a room, where you got dressed (made your toilet), became known as a toilet. As time went on, and the link between the word toilet and the idea of dressing became less obvious, toilet came to refer to a room with a lavatory, and also to the lavatory itself.

And things haven’t changed that much. Toilet is now the most common term for a lavatory, and is still often used to refer to a small room with a toilet and wash hand basin, with bathroom referring to a larger room with a bath and/or shower. In British English at least, because in American English, the word toilet usually refers just to the lavatory itself, and a room containing a toilet is often referred to as a bathroom (in a house), or a restroom or a washroom in a public place.

I can understand the desire to refer euphemistically to the toilet/bathroom, and specifically to avoid referring to the object itself. Even still, I’ve always considered restroom to be just a bit too much. Washroom, fine, because you are going to wash your hands (presumably). Bathroom, OK, because you’ll usually find a toilet in a room with a bath. But restroom? Who goes there for a rest? I mean yes, you can sit down there I suppose, but it just seems so euphemistic that it makes you aware that it’s replacing a more unpleasant concept, and makes you think about it, ruining the whole point of a euphemism.

There are of course many other euphemisms for the toilet. Another, more informal one in American English is the john. This may have come from the term Jake‘s place, a euphemism for an outhouse (outdoor toilet), which may date to the 16th century. Jake in this case would have referred to a generic peasant, and may have changed to John’s house and then the john in the United States, with John being an equally generic male name. Jacks is still an informal euphemism for toilet in general in Ireland, also derived from Jake‘s house, presumably.

Loo is probably the best known British English term for toilet. Its origins are difficult to pin down. Some suggest it dates back to medieval times. Servants (whose masters would generally have spoken or at least have known some French) would empty chamber pots by throwing them out the window into the street below. They’d usually shout Gardyloo!, from the French Gardez l’eau! (Look out for the water!).

Then there’s the house of office, which has been used since at least the 17th century, featuring in Samuel Pepys’ diary. The powder room is along the lines of restroom for me: so unrelated to the room’s function it actually makes you think of its function.

Privy is more than likely an abbreviation of private place, which is the least you can ask for from a toilet.

Going to the toilet in the UK is sometimes referred to as spending a penny. This is because of the fact that public toilets were introduced to London in the 19th century with locks that could be opened with a penny.

I could go on, but when you think about it, basically every possible way to refer to a toilet is basically a euphemism. As we’ve seen, the word toilet originally had nothing to do with the object, and took a few hundred years to come to its modern meaning via a very scenic route. Even lavatory (late 14th century), which predates toilet, is from the Latin lavatorium, meaning washing place.

As I’ve said though, it’s quite understandable why we choose to be euphemistic about the toilet, and it’s an interesting case of how language evolves naturally and original meanings get lost, as well of how our own psychology affects the course of linguistic evolution.

Are there any euphemisms you know (in English or other languages) that I haven’t mentioned here?

22 thoughts on “Get your Mind out of the… Restroom? Euphemisms for Toilet”