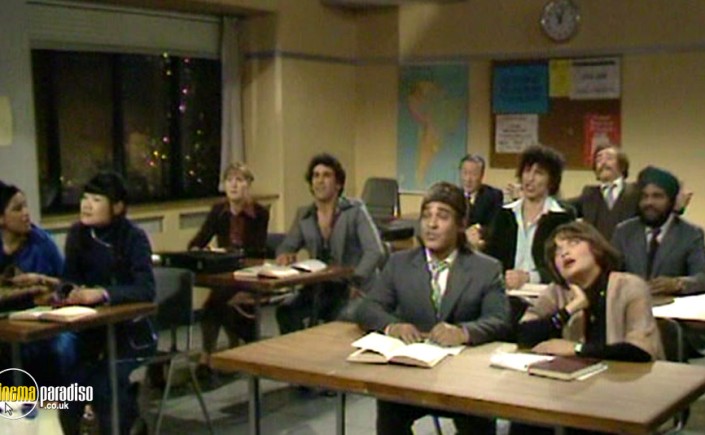 *teacher writes Hello, my name is Niall. on the board*

*teacher points to self, says Hello, my name is Niall*

Pedro: Hello, my name is Saud.

Anna: Hello, my name is Anna.

Chen: Hello, my name is Anna.

Teacher: Ha ha, no Chen, your name is Chen!

Teacher: Ok everyone, before you go, I want you to write Hello , my name is… 50 times on a suitably blank surface. Class dismissed!

I think the above is pretty representative of most of the depictions of English-language classes I’ve seen in films and TV programmes. I know everyone gets annoyed when their profession is depicted on screen and it’s quite inaccurate. We can’t expect film and TV writers to be experts in a job that might appear briefly in only one scene. But what annoys me about the way English classes are shown is that it’s indicative of a lot of people’s misconceptions of English-language classes.

Let’s look at what’s wrong with the lesson above.

First, there’s no context to the language presented. The students aren’t given any sense of when to use this phrase. Do they have to use it at the start of a lesson? Do they only use it when talking to a teacher? With functional language like this, students need to know the situation to use it in. Giving them a real-world application for the language is also a great motivational factor.

Second, the language is very simple. Now there are absolute beginners out there, and the language in a Beginner class will necessarily be simple. But every English-language lesson on screen seems to be a Beginner one. Where are the B2 and C1 classes looking at the third conditional and discourse markers? I wonder if people think that teaching English is simply a matter of giving students a few simple phrases and setting them loose on the world.

And this idea of giving the students the language is one you won’t find in many modern English classes. At Beginner level, the teacher will have to feed some language and give direct explanations to students, but even then you can still get students to try to discover the meaning of language themselves. Once you get to higher levels, you’ll find yourself working with students who’ve already studied the language point of the lesson before. In that case you can shift a lot of the work onto the students and become a facilitator for their learning, rather than a lecturer standing at the top of the class explaining things. You can elicit what they’ve learned already (which stronger or more experienced students can explain to others), then move on from that knowledge to get them to figure out the meaning of trickier but perhaps related language forms.

A screenwriter might be surprised to walk into a good modern language lesson. The first thing that should surprise them is how little the teacher is talking. English teachers are taught from early on to minimise their TTT: teacher-talking time. An ideal lesson (in many cases, for me, but you have to adapt the lesson depending on the students and the target language) would feature students first working together to discover the form and meaning of the lesson’s target language while the teacher monitors and then confirms the form, meaning  and pronunciation of the language with the students. Then they could work together again, maybe with a different partner or in twos instead of threes to do some practice with the language to ensure they’re confident with it and they retain it better. Finally, they’d do some free practice with the target language in a situation which reflects how it’s used in real life, with some discussion afterwards. Again, the teacher monitors and steps in for error-correction when appropriate. All of this should ideally be done within a lesson about an engaging and relevant topic.

Why would a class like this work? It’s student-focussed so it gives them a sense of control over the learning, and the collaborative work in figuring out the language themselves helps them retain it better. Likewise with the free practice at the end, which also demonstrates to them the practical real-world value of the lesson. Granted, on many occasions a teacher will have to step in and simply explain something, but that should never be all the time. Certainly my personal style is more of a facilitator of learning than a lecturer. Even when correcting errors, I always prefer to help the student to correct it themselves and figure out why it’s wrong and why the correct answer is correct. They’re much less likely to make the mistake again that way.

I do understand though, that such a lesson might not be very interesting to watch on film. But I feel that many people have a very simplistic impression of English-language teaching from film and TV. I come across so many people who think that simply speaking English qualifies one to teach it. But I had no idea what the present perfect continuous was before I trained to be a teacher. I used it correctly, but I didn’t know the name of the form and wouldn’t have had much of an idea of how to help students understand how and when to use it. To become a good language teacher you need a lot of training and lot of experience learning as you teach, and making mistakes (Like that time I began a lesson on bloodsports with Italian teenage girls by having them talk about all their sweet little pets at home that they missed so much. That was a jarring transition to say the least).

You need to be able to step back from the language and see its structures as though through the eyes of someone learning it, which is very difficult to do with your native language, as we don’t really learn it, just acquire it. This can be even more difficult for English speakers as we don’t really have the same pressure to learn a second language that speakers of other languages have, and therefore the quality of teaching second languages in English-speaking countries can vary, to say the least. Having the experience of learning another languag well is a great aid in teaching your own language, as you can relate to your students’ situation.

Strangely enough, one of the more accurate depictions of an English-language class is in the 1970s British sitcom Mind Your Language. It’s very dated now, and any millennial seeing the humour derived from quite crude stereotypes might be shocked at what was acceptable in the 70s. It wasn’t ill-intentioned or vicious at all, but still, be suitably warned if you watch the video below:

At least the writers seemed to know a little about the English language, and though there’s not much independent language production, there is a greater student focus than you usually see on screen, with some eliciting and guided discovery on display. Lots of racial stereotyping too though!

So the next time you meet an English-language teacher, consider that their job is not necessarily so simple, and that they’re more than likely very intelligent, knowledgeable, skilled, charming individuals.

10 thoughts on “Teaching on TV”