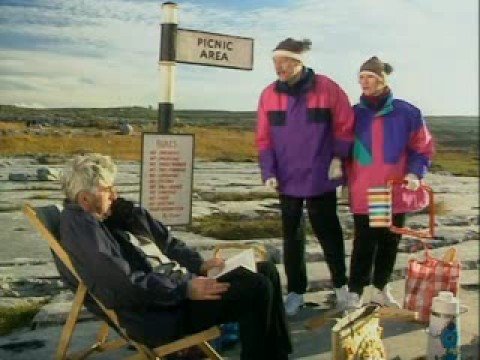 He’s also Irish, which again, weirdly, a plus point, if you like swearing. He’s often on his show: Feckin’ dis and Feckin’ dat. Some Irish people say Feck off isn’t as bad as F*ck off, but I think that’s b*llsh*t.
Or bellsh*t.—Alan Partridge

English is of course not without a healthy number of swearwords. Though I personally try to avoid using some of the worse ones, I do appreciate the power they have to emphasise a point when used appropriately.

What I’ve been thinking about today though is how we avoid using them, and particularly how we create polite forms of swearwords. Which seems odd, when you think about it. I suppose it’s a case of having your cake and eating it too: wanting the force and illicit thrill of using a swearword, but without actually using it.

We’re quite  good at that in Ireland, especially for replacing the f word. Maybe it’s that old Catholic guilt making us hesitate about cursing too often. There’s the classic feck/to feck/fecking/fecked/fecker etc., introduced to the UK through the sitcom Father Ted. I’m quite fond of it, though I do think it’s pushing it a little by being only one letter away. There’s also the gentle flip, which is what you train with when you’re too young to use feck.

Sugar instead of sh*t is also fantastic, simply because it’s so ridiculously sweet (basically literally) and polite, making it the opposite of what it replaces. Shite is a funny one, because while it’s more polite than sh*t, it’s still not as socially acceptable as feck, and is still basically a swearword.

While there are polite forms of swearwords all over the world, I’ve always been intrigued by how American ones differ from those in Ireland and the UK. It took me a long time to realise that heck and darn were polite form of hell and damn respectively. I would never even have considered the latter two to be swearwords in the first place, especially as it’s hard to talk about Christianity without using them. Maybe we Europeans are just such amoral libertines that we don’t mind using them. What really makes me smile is replacing hell with H-E-double-hockey-sticks. Like sugar, it’s so polite, so far-removed from actual swearing, that you’re better off just saying something nice and entirely different.

One of my favourite f-word substitutes though, comes from many light years away: frak* from Battlestar Galactica (first used in the original 1979 series, but featured more widely in the excellent remake). Like f*ck, it can be a verb, noun, adjective or general expletive. It sounds harsh and unpleasant, like a real swearword, and it’s also a little detail that helps to flesh out the universe of the programme. It makes it feel like a real, fully-conceived world with its own customs, beliefs, jargon and swearwords.

And you can use it on this planet without guilt.

*Fun fact for fans of the remake: the mirror Adama was frequently seen using while shaving is a genuine IKEA model named Frack.

There’s something joyful about the combination of creativity, politeness and still-basically-just-cursing you find in made-up swearwords that we should all celebrate:

9 thoughts on “No Swearing”