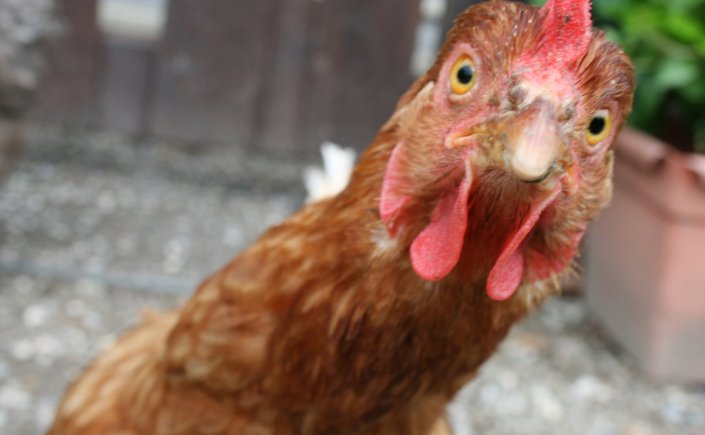 Well, never, of course. But these two words are quite often confused by English-language learners. It makes sense really. The two words obviously sound similar, and that’s particularly true for speakers of languages which don’t make such a distinction between the ch (/ʧ/) and k (/k/) sounds. And of course it’s logical to create an association between the two things: where else are you going to keep your chicken?

This mistake is just one of the many common mistakes learners make that are quite hard to imagine before you start teaching. And that’s why when you see English lessons on TV or in films, they’re never really like the real thing, and that goes for the mistakes students make. Of course they have to think of making entertaining work first, though I can imagine it wouldn’t be too hard to get a cheap laugh out of the chicken/kitchen confusion.

A similar mistake, confined mainly to Romance-Language speakers, is to say something like I love French kitchen. While this might sound odd to our ears, if you know that in French, Italian, and Spanish, the same word (cuisine/cucina/cocina) is used to mean both cooking and kitchen. And it does kind of make sense that the words would share the same meaning: where else are you going to do your cooking? And given that in these countries, cooking and eating have a more integral place in daily life than in most Anglophone countries (and much better food), it makes sense that cooking and the kitchen would be equated.

And we don’t deny that, though we’re catching up, we’ve not always had a great culinary culture in English-speaking countries. That’s probably why we use cuisine instead of cooking when we want to talk about good cooking. Or perhaps, if it’s really good, we’ll extend to haute cuisine (high cooking) or gourmet (gourmet). Doubtless that’s also because we like the sound of French.

Anyway, just some food for thought the next time you feel like some haute chicken.

19 thoughts on “When is a Chicken a Kitchen?”