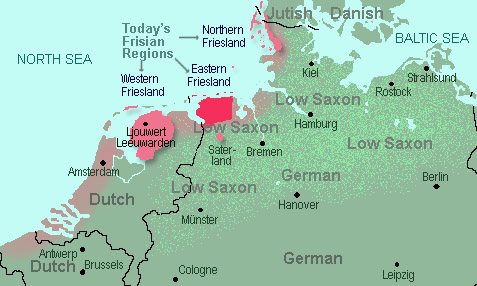 If you have a spare four hours or so, have a look at all parts of this ITV documentary The Adventure of English. Or the first part of it anyway:

As I’ve mentioned often before, and as the first part of the documentary covers, English is a predominantly Germanic language, with a strong influence from other languages, especially French and Latin. The beginnings of what would become English were found in the Frisian languages of modern-day Germany, Denmark, and the Netherlands. However, by looking at texts in various languages such as Dutch, German, and the various Romance languages, you’d be forgiven for thinking that English owes a lot more to Latin, either directly or indirectly, through French.

Estimates vary as to what percentages of English words come from which languages. I’ve seen estimates of how of English is derived from Latin between 55% and 80%. I wouldn’t be surprised if, including all possible definitions of an English word, the number was closer to 80%. Estimates of words derived from Germanic languages are usually between 20 and 30%. This surely suggests English owes more to Latin, but the situation is a little more complicated than that. Many Latin-based words are quite formal, or used as scientific terms, which are part of the English lexicon, but not used very often by the majority of people. On the other hand, a majority of the most common words we use everyday are Germanic in origin, with some estimates placing the percentage at about 80%.

That still might seem hard to believe, as the average person will probably be able to make a little more sense of Latin-based languages when reading them. If you’re looking for a hospital it probably won’t be too hard in France/Wallonia (hôpital), Italy (ospedale), Portugal/Brazil (hospital), or Spain (hospital). It might be a little more difficult in the Netherlands/Flanders (ziekenhuis) or Germany (Krankenhaus). It might be a little more difficult though in the Romance-language speaking countries if you’re looking for something more specific though. Say you want to find the nurses’ station in a French hospital though. You might see a sign saying station d’infirmières, and perhaps the word station will be enough to make you think you’ve found the right place. But you’re not exactly sure what d’infirmières means. Take away the d’ and you’ve got a word that looks like infirmary. But you’re in a hospital with all sorts of medical words on signs: that could mean one of many things and it’s not clear that it’s the French for nurse. And can you just take the d’ away anyway? This is where the gap between Latin and modern English becomes apparent. Latin words will often give a very general sense of their meaning, but it can be difficult to pinpoint exactly what they mean. Imagine you’re in a Spanish hospital and you see a sign saying el médico. Is that doctor, or medicine, or medic, or something else?

Sure, German and Dutch can be incomprehensible to beginners too, but if you squint a little, you can see their relation to English. Think back to ziekenhuis. Why, that kind of looks like sickhouse, which is kind of what a hospital is, so maybe it means hospital! If you read enough German and Dutch, obvious similarities to English will jump out at you. If you’re looking for a bar in Berlin, you’re in luck, as they call a bar a bar. Even if someone decided to call their bar something like Bierhaus, you can probably figure out what you can get there. Sure, you’ll probably notice more similarities to English while travelling in a Romance-language speaking country, but they’ll usually only give you a general sense of what they mean, whereas when you recognise a word in Dutch or German, you’ll probably know exactly what it means.

The situation is interesting in terms of listening to languages though, and this is where I think English’s Germanic roots become really apparent. Latin-based languages are generally easier to understand when reading them rather than listening to them. Listening is tricky as of course native speakers will speak quickly, but the rhythms are quite different, and words which look familiar on paper can be hard to pick up when listening as they often sound quite different from English words which look like them. Whereas while Germanic words can look quite different from related English words, when you hear them spoken, the similarities become apparent due to our similar accents. Have a listen to these two Belgian news reports, one Walloon (French) and one Flemish (Dutch):

If you have no knowledge of either language, I wouldn’t be surprised if both were fairly incomprehensible. I think you may have got a vague gist of what they were talking about in the French one, because of some familiar-sounding words, perhaps even two in a row. But then it might have been hard to notice distinctions between words, and with an average person on the street it would be even harder. Specifics were probably hard to figure out though, and you might have been led astray by some false friends: words that sound like English words but have different meanings. The Dutch one was probably harder to get a grip on overall, but some words probably popped out as sounding exactly like English, like the way the newsreader pronounced Muslim. And the fact that they call it nieuws, and not actualités (or nouvelles) makes it easier to know you’re watching the news.

What does this mean in practical terms? Well, if you’re going on holiday to somewhere where they speak a Romance language, you’ll probably find it a little easier to find your way around. But if you’re looking to move abroad permanently, and learn a language, you might find it easier to learn Dutch or German, in the long run (just as Dutch and German speakers tend to have good levels of English overall, compared to speakers of other languages). When learning a Romance language, you’ll probably be initially encouraged by figuring out the meaning of some words quite easily. But you might get frustrated when some words don’t mean what you think you should, when you forget that sentence structure can be quite different, and you never remember how to conjugate verbs (you only have to do it once in English!). Learning Dutch or German might be tricky at first, but after a while you’ll notice the similar words, and if you really get into it, you might see the similar grammatical structures, relative lack of verb conjugation, and the general directness both languages share with English, in contrast to the greater wordiness of Latin languages.

I like to think of English as an ideal sports car: Latin flashiness on the outside, but with a solid no-nonsense Germanic engine under the bonnet.

12 thoughts on “Double Dutch – the History of English”