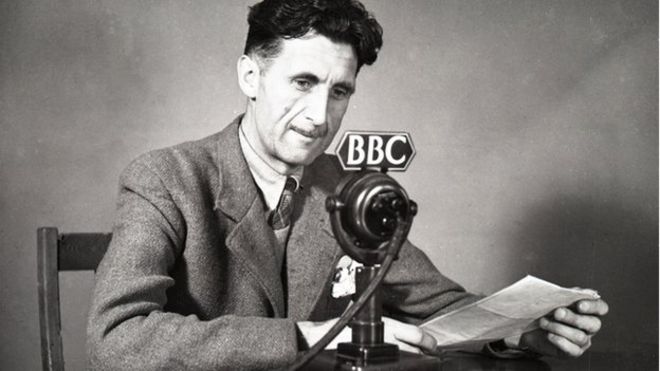 Now, let’s imagine you’re writing an essay about your favourite novel. A logical start would be to mention who wrote it, like so:

Nineteen Eighty-Four was written by George Orwell in 1949.

What’s the difference between these two sentences? I’m sure you’ll agree that both contain the same information. But the focus is different, isn’t it? In the first we’re focussing on the writer, and in the second, on the novel. And we change focus by changing focus – between the active voice and the passive voice.

Most of the time, in our speech and in our writing, we use the active voice. Voice in English is based on a fundamental aspect of grammar: the use of subjects, verbs, and objects. Every sentence has a subject and a verb, and will often feature an object. Very simply the subject is the person or thing performing the action represented by the verb, and the object is on the other end of the action. Like so:

This is the normal order of a sentence in English (and many other languages), but if we want to focus on the object, we make it into the subject, and put it at the beginning of the sentence. We also need to make two more changes: change the verb to the past participle (written) and put the appropriate form of the verb to be (was) before it.

Cases like above are the most common reasons we use the passive voice, when we’re more interested in the object of the action than the agent. So we say John F. Kennedy was assassinated on 22 November 1963 because we’re more interested in him than Lee Harvey Oswald (or whomever…). What I find most fascinating about the passive voice is that unlike most other grammatical forms, we can choose to use it or not. We can’t, for example, decide to say I eat pasta instead of I’m eating pasta, but we can decide to say Lee Harvey Oswald assassinated John F. Kennedy (Though that sounds funny, doesn’t it? I don’t think I’ve ever heard assassinated used in the direct voice before. Which is logical enough, because we usually care more about the assassinated individual. Otherwise they’d just be killed, not assassinated.)

Sometimes of course, it make a lot more sense to use the passive voice. For example, we don’t say:

The police arrested two men in connection with the attack.

Some builders built this castle in the 13th century.

Instead of course we say:

Potatoes are grown in Ireland.

Two men were arrested in connection with the attack.

This castle was built in the 13th century.

In each case it’s so obvious who the agent is that we don’t need to mention them, and we’re not interested in them anyway. We’re interested in potatoes, criminals, and castles respectively (how else do you spend your weekends?), so we use the passive voice. In speaking, we usually use the passive voice unconsciously in situations like this. In writing though, it’s a different story.

Don’t get me wrong, the passive voice can be useful in your writing. Generally, it conveys a greater sense of formality than the active voice. Partly I think that’s due to length. In English, the longer your utterance, the more formal/polite it is. I think the difference between Give me your pen! and Excuse me, would you mind terribly if I borrowed your pen please, if it’s not too much trouble at all? is fairly evident. With the passive voice, even a simple three-word sentence becomes much longer and more formal if we mention the agent:

Cake is liked by me.

The passive voice is also more formal simply by being more, well, passive. Consider the sentence John hit Tom. It’s short, sharp, and brutal. And full of action! But if we change it to Tom was hit by John, it becomes much more genteel. We’re delaying the action, moving it one place back in the sentence, making the sentence less blunt, and less dynamic too. We’re also beginning not with action, but with the consequence of that action, a state. We begin the sentence by imaging the aftermath, a bloodied Tom. We then look back at the action, and finally the person who actually performed the action. It’s like we’re rewinding a tape, and ultimately it’s the image of the injured Tom that remains in our mind more, rather than the action of John hitting him. If these sentences were films, the active one would be an action film, and the passive one a contemplative drama about the consequences of violence.

Such distancing is fine of course if you want to be formal, especially in situations where that’s expected, like academic writing. Problems arise though, because often in such cases we’re already using fairly formal language. This can lend to tortuous, incomprehensible sentences in which complex ideas are rendered more complex by being made passive. The passive voice can also be used by the lazy researcher who doesn’t want to go back and find a reference for an idea (s)he read somewhere. Hence:

It is believed that this is one of the most important works written by Orwell during the period in which he was employed by the BBC.

Not only is this too long and complicated (three examples of the passive voice in one sentence!), but it’s weakened by not mentioning who believes this. Of course if this person knew who believed this, they’d say so. Otherwise, they’d have to write:

Some people believe that this is one of the most important works Orwell wrote while he worked at the BBC.

We’ve improved things a bit here by making those second and third verbs active, but that Some people sounds weak. Right at the beginning of the sentence we’re revealing our lack of knowledge, or even the fact that we’re making things up. By using the passive though, it doesn’t seem so obvious, but one can still sense a weakness in the sentence, and overuse of this form will usually be noticed very easily in academic writing.

And then sometimes the use of the passive voice is simple pretentious. It’s an easy way to make yourself sound more formal without really having to come up with any fancy new words. But again, overuse will eventually undo you.

That being said, I don’t recommend complete avoidance of the passive voice, and I think it’s unfairly vilified (by whom!!??). Ok, I think too many people like William Strunk Jr. who write style guides can be overly zealous in recommending people avoid it (ugh, what an awful sentence! See, sometimes the passive voice is better). I simply recommend that if you find yourself tempted to use it, think about why. If you want to focus on the object of an action, and the sentence sounds ok, then go for it. If you have doubts, convert the sentence to the active voice in your head. If that sounds ok, then use it.

Simpler is usually better in writing, but remember that it’s often been written by me that the context is always depended on by it!

12 thoughts on “The Passive Voice”

Leave a Reply to “I’d Been Being Watched!” – English-Language Thoughts Cancel reply