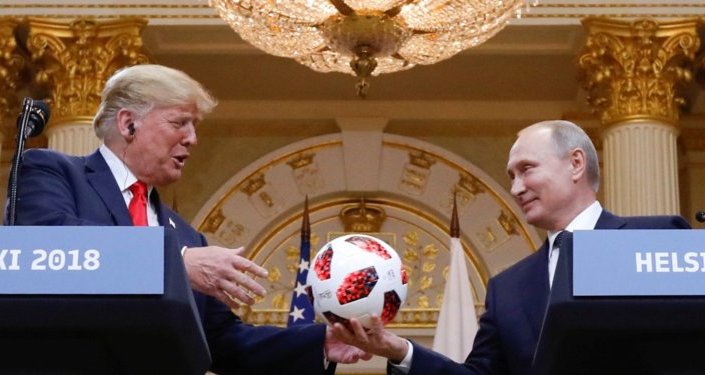 About a day before the time of writing, President Donald Trump, of the United States of America, said the following, in relation to meddling in the 2016 election:

President Putin Says it’s not Russia. I Don’t See any Reason Why it Would Be.

The world’s reaction was strange, in that it wasn’t strange. Because it’s unprecedented that the President of the United States would so openly side with a Russian president who murders people and is so clearly working against American interests.

But when you’re so used to the unprecedented with Trump, can anything be surprising? Obviously this Helsinki summit and press conference are a bit beyond the pale, even for Trump. He’s always been clearly in Putin’s pocket, but to see him so clearly demonstrate it publicly has still been pretty amazing, and has rightly got people pointing out his treason.

There was lots of clear evidence of Trump’s cozying up to Putin during the summit. Even the fact that it went ahead, given that twelve Russian agents had been indicted for meddling in the 2016 election shortly beforehand, is evidence enough of that. But a lot of people pointed to that statement as the clearest and most shocking example of an American president actively siding with a foreign nation actively conspiring against the United States (and basically the rest of the world, and the forces of good in general).

But wait!!! It’s OK guys! He said today that he actually meant to say WOULDN’T!!

You know how we all do that, using a positive form of a word instead of a negative one, don’t you!? Like when you say something like:

I can believe that idiotic, narcissistic sociopath got elected!

I have got the faintest idea how anyone, in good conscience, can support him!

I hope he does use another pathetic, incredibly transparent lie, to try to take back his treasonous remarks!

Surely we all do that all the time, don’t we!? I can imagine it’s not a common phenomenon at all…

I meant to say, I CAN’T imagine it’s not a common phenomenon at all. Oh my God, look at how easy it is do it! IT’S DEFINITELY A REAL, NORMAL THING THAT HAPPENS TO NORMAL PEOPLE ALL THE TIME!!

OK, let’s step back and look at this objectively, linguistically, and see if he’s maybe telling the truth when he says he meant to say wouldn’t. Let’s look at both sentences and the evidence for whether they might be what he meant to say.

“President Putin Says it’s not Russia. I Don’t See any Reason Why it Would Be.”

Looking at this in a linguistic sense, it certainly makes sense. First of all, no utterance exists in isolation, so to make sense of it, you have to look at its context. And the context here is that Trump has always favoured Putin, even over traditional allies. In his demanour, behaviour, and other remarks in Helsinki, this is also clear. Because these sentences also clearly suggest Trump sides with Putin over the American intelligence agencies, it’s likely what he meant to say.

Even looking at it isolation though, it still makes sense. There’s a clear relationship between the two. The first introduces an idea, and the second reinforces it. It’s a very common way to link sentences, and the simplest way to demonstrate that the two share such a connection is just to avoid using any words that contradict this. Like so:

I like ice cream. It’s perfect on warm summer days!

A very simple pair of sentences, but their complementary content, and placement one after another, make it clear that they work together. The same thing is happening with the two sentences Trump actually said. The second sentence logically supports the first, and Trump didn’t use any of the obvious words he could have to indicate a contrast between the sentences. He put in an I will say this, but that just served to emphasise the sentence that followed.

But there are other ways to indicate contrast: tone, deliberate pauses, gestures. But if you watch the clip, Trump doesn’t use any of these to suggest a contrast between the two sentences:

He also says would in a clear way, not the way one might say it if they’d meant to say wouldn’t but got confused. In fact, he strongly emphasises the word, to stress its contrast with the negative form (it’s not) in the previous sentence.

My conclusion: this is almost certainly what he meant to say.

“President Putin Says it’s not Russia. I Don’t See any Reason Why it Wouldn’t Be.”

Before we go into detail, please read that sentence out loud. How does it sound? Does it sound like something someone would actually say? It doesn’t, does it? The rhythm’s completely off. There are too many negatives (not, don’t, and wouldn’t all in quick succession). I don’t see any reason why it wouldn’t be simply isn’t a natural way to say it. Why not just say I disagree, or, I think it was Russia?

Most importantly though, Trump wants us to believe there should have been have been a contrast between these two sentences (Putin says it wasn’t Russia vs I think it was), but doesn’t indicate this in any of the normal ways we do so. Why didn’t he use but or however (OK, he probably wouldn’t use however) to show this contrast? This is something we do so automatically that it sounds weird when we don’t use them, and we basically have to make a conscious effort not to use them. We’re simply so used to using them, and to the sense that not using them implies a complementary relationship between statements, that it’s weird when we don’t follow these conventions. For example:

I like ice cream, but it’s perfect on warm summer days!

Obviously both sound very unnatural, and we’d never say anything like this. But Trump wants us to believe that’s what he did. He wants us to believe he followed one statement with a contrasting one, without using any of the various methods at his disposal to indicate this contrast, something a native speaker would do. Or even a non-native speaker, as these conventions are quite common across languages.

The only possible point in favour of Trump not having actually meant to have said wouldn’t is his general difficulty with the English language. The fact that he struggles with many of the fundamentals makes the tiniest part of me think that maybe he did mean to say something as awkward as what he claims. And then, because he has no attention span and can’t organise his thoughts, he didn’t say the nonsense he’d planned to say, and actually mistakenly said something that made sense. It’s ever-so-slightly plausible, but I still don’t think it’s the case, as he just doesn’t plan his words that much. He seems to just stumble from word to word (except when reading from that piece of paper today, like a scolded child reading something his parents wrote).

Conclusion: it’s so unlikely that Trump meant to say wouldn’t that we can safely say that it’s a lie. Another lie, but it’s so depressing because it’s not even a good one. He’s not even clever enough to try to hide it. Or else he just doesn’t care enough about making his lies plausible, just as he doesn’t bother hiding his relationship with Putin.

It’s depressing that he’s so stupid that he can’t lie well or hide his treason, but he also doesn’t care enough to try to do either, and he knows his most fervent supporters will stick with him, just as he’s stuck with Putin.

At least we might get a bit of a laugh when the pee tape is finally released, as we sit among the ashes of civilisation, huddled together for warmth.