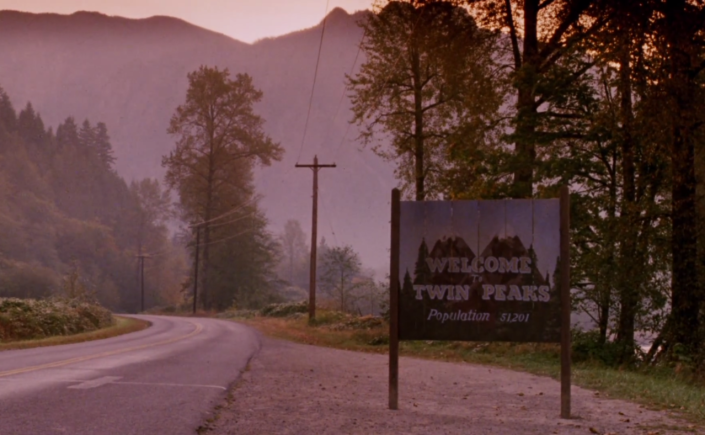 You might be aware that the classic early 90s TV programme Twin Peaks is returning tonight. In an era of so many different viewing choices, in terms of both content and medium, it’s hard to imagine how much it was talked about when it first aired. Even though I was only six at the time, I still remember everybody talking about it, and have never forgotten the image of a bloody and battered Ronette Pulaski walking along the train tracks.

Though I didn’t really watch it at the time, I did in 2007, when I decided to write about the films of its co-creator David Lynch for my university dissertation. It will be interesting to see how modern audiences take to it, as its blend of mystery, humour, the supernatural, and the suggestion of bizarre goings-on under the surfaces of small American towns inspired many more modern TV programmes.

The programme perhaps hasn’t had a huge influence on the English language, except perhaps for the number of people describing their coffee and cherry pie as damn good in the early 90s. And the 1992 film Twin Peaks: Fire Walk with Me did introduce the word garmonbozia to the English, which obviously refers to pain and suffering visually represented by creamed corn. Surprisingly, the word hasn’t been used much outside of the film.

In terms of this post I’m particularly interested in this film. It wasn’t well-received at the time, as people assumed it would resolve the cliffhanger ending of Season 2 (after which the series was cancelled). When it turned out to be mainly a prequel, people weren’t happy (it was booed at the Cannes Film Festival, in a timely enough way, though they take every opportunity to boo there). Plus, co-creator Mark Frost wasn’t involved, so David Lynch was free to indulge in many of his surrealist habits, and the film lacked a lot of the programme’s merits. Taken on its own though, it’s a really good, terrifying and incredibly sad film.

One scene that really intrigued me when I first saw was one set in a seedy nightclub, in which we can barely hear what the characters are saying because the music is so loud. We can catch little snippets of the dialogue, but not everything, tantalising us with hints at some of the town’s darker secrets. Curiously enough though, if you’ve seen the film, you may remember that scene having subtitles. When the DVD release was being prepared, David Lynch was asked if that scene should be subtitled. He thought about it quite a bit, changing his mind quite often, and though he seemed to have finally decided that there should be subtitles, the British and Japanese versions of the DVD had already been shipped without subtitles. Personally I prefer the scene without them, but it’s interesting how something seemingly so practical and mundane such as subtitles can change the meaning of a film.

But of course that’s already the case for many people. For an able-bodied English speaker, the scene might work perfectly well without subtitles. But if someone is hearing-impaired or not a native English speaker, the scene requires subtitles, and it’s therefore going to be a different experience for them. Which is the case anyway for millions of people around the world watching English-language films and TV: even if the subtitles don’t give more information as in this case, watching a translation is always going to be a different experience. I was thinking about this again while watching the very meh and entirely unnecessary Alien Covenant. In Wallonia and France, most English-language films are dubbed into French, but in Wallonia , a smallnumber of cinemas will have a few screenings in English with French and Dutch subtitles (which are quite distracting as they take up so much space). This is how I watched the film. In it, Michael Fassbender plays two characters: one with an English accent, and one with an American. I wondered how this works in the French dub. The simplest thing to do would be to have each character speak French with their respective English and American accents. I’m not sure this would really work though, as the accents would not be so apparent when speaking French. Plus, most of the time, voice actors use their own accent, even though the majority of characters they play are American, so to suddenly hear two non-French accents in a film in which everyone else has a French accent would be strange. I may go to see it in French, just out of curiosity, though I expect that it will simply be the same actor using his own accent for both characters, though perhaps with different speech patterns.

It just goes to show how lucky English speakers are that most of the films we watch are in our native tongue and with the actors’ own voices. But it’s interesting to see how much thought and work has to go into translation, and if there’s anything interesting going on in regard to voices, accents, or language in general in a film, that’s going to tricky to capture in film. Oh, and another thing I’ve learned at the cinema recently: in Guardians of the Galaxy Vol. 2, the “Awesome Mix” tape which provides much of the soundtrack is known as “Super Mix” in French, and “Cool Mix” in Dutch. Which kind of make sense, though you might think that super and (ironically) cool are not as cool as awesome in English. But then, super in French is different from super in English, as is cool in Dutch, so I’m sure they have the same effect for French and Dutch speakers as “Awesome Mix” does in English. Sure, they’re English words originally, but when they’re used in another language they take on their own connotations.

Anyway, if you’re watching Twin Peaks tonight, enjoy it, appreciate the actors’ own voices, and remember: the owls are not what they seem…