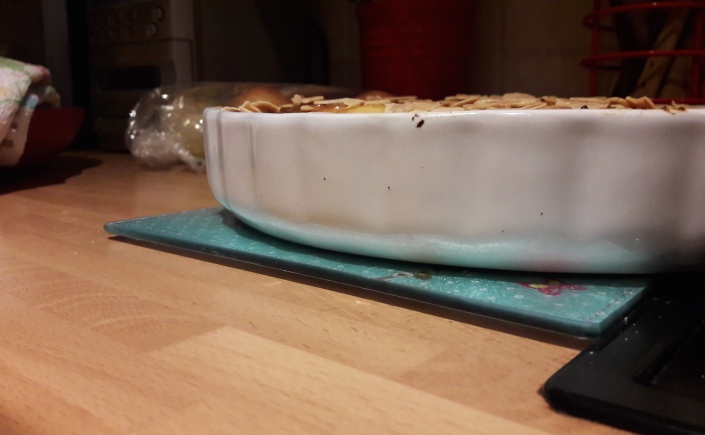 This is something I often ask myself. And then, I look it up. When I get the answer I’m satisfied, and then I don’t think about it again. And then a few months later I ask the question again, and I can’t remember the answer. Partly because it’s not so important, I suppose. And partly because I struggle with 50/50, it’s-one-or-the-other style answers. Like what the difference between biennial and biannual is, which I’ve long struggled to remember (though I think I know it now, but I don’t want to google it in case I’m wrong: I couldn’t face such a setback).

Only, the difference between a tart and a pie isn’t so trivial to me. Because I enjoy baking occasionally. I’ve liked cooking for a long time, but there was always something stopping me from baking. Maybe it felt too difficult, or I was afraid I might fail, I don’t know. But I’ve made a few things now, and baking’s not so bad. It’s basically just cooking, but with more particular ingredients and techniques. And I’m pretty sure that I’ve made some things that could be either tarts or pies, and I want to know one which they are! In fact, at this very moment I have something in the oven (I checked to see if it was ready after the comma after cooking, three lines above) and I’m not even sure if it’s a pie, a tart, or a cake.

Well, I know it’s not a pie, because it just clearly isn’t one. And if you’d asked me to guess, I’d confidently call it a cake. The thing is though, the recipe calls it a tart, and I’m willing to defer to Mary Berry on this one. But I’m looking at it, and I still think it could be a cake.  Rather than just google it again, only to forget it again later, I’m going to think about and try to figure out which is which, right before your eyes…

Let’s get cake out of the way first. I think a cake is just anything baked with flour, eggs, and sugar. That makes sense to me. Now moving on to the real issue. Tart or pie. Tart or pie…

I’m going to commit to an answer here: a tart has no pastry covering, whereas a pie is covered all round by pastry. It was thinking of lemon tarts and jam tarts that gave me the idea. And that’s why I think an apple tart might be a bit of an exception, because usually when I‘ve had apple tart it’s had pastry on top. And when I imagine pies, either sweet or savoury, they’re always completely covered. Now to Google, to see if I’m right…

Not at all! Well, a little bit. I’m basically right about the pastry covering the top of a pie. But look at all these details I didn’t take into account:

1.Pies are usually round while tarts have more freedom of shapes (oblongs, oval, squares, and even some irregularly formed).
2.Pies are baked using ceramic, Pyrex, or metal pans while tarts often use metal pans.
3.Pie crusts can cover the top of the pie while tart crusts rarely cover the top of the pastry.
4.Pie crusts are flakier, lighter, and crisper while tart crusts are firmer and crumblier.
5.Pies are usually immediately served using the actual pie pans used in baking them whereas tarts are first cleanly removed from the pan and then placed on serving plates.

Well, that’s something isn’t it? Of course not every little nugget of language can have a fascinating history. Sometimes, the differences between words are pretty mundane, and don’t give us much to get excited about. And that’s ok, because language doesn’t always have to be fascinating. I mean, it is overall, but sometimes you look at a little aspect of language, and there’s nothing really interesting there. And you also end up being wrong by making wild assumptions about what pies and tarts are.

Ah, but I don’t mind that I was wrong. I’m glad I thought it out, and tried to follow some logical paths, even if I was entirely misguided the whole time. It’s good to exercise our critical thinking now and then. It’s easy to just search for the answer, and there’s nothing wrong with that. You can’t figure everything out yourself. But the fact that I can never remember the difference between biennial and biannual, or pie and tart, demonstrates the limitations of simply being provided with information. It works at first, but the information doesn’t really stick. But thinking things through, analysing them, helps us to retain knowledge. It creates an association in our mind between the memory of figuring things out, and the knowledge we gain. And that association helps us to remember what we’ve learned. And of course there’s the more important association between the knowledge and the sense of achievement we feel.

This is universal, but it’s sometimes I’ve often thought about in terms of language. As I’ve mentioned before, language classes are usually much more successful, and interesting, if they focus on students discovering and analysing language. And this doesn’t have to stay in the classroom. If you’re learning a language, take your time to really notice it. When you read something or listen, really think about what the words might mean, why they look the way they do, how they might be related to other words. You’ll figure a lot out, and remember it. And best of all, it’ll probably be quite interesting. In fact, you can do it with your own language, because we don’t normally reflect on our native tongue. That’s basically what I do with this blog, and I enjoy it. Even if you’re barking up the wrong tree, the process of trying to figure things out will still give you insights into the language, and help keep your critical-thinking skills sharp in the Google Age.

Besides, who needs to know the difference between a pie and a tart anyway?

20 thoughts on “What’s the Difference Between a Pie and a Tart? (I don’t Know)”