Why no!, not, in fact, a blank page, but rather a continuation of the theme of what I don’t know about English (though you can expect this to be a very short series of articles). Today I want to have a look at the last book I’ve read: Cat’s Cradle, by Kurt Vonnegut. Like most books I read, it was a second-hand copy from my favourite bookshop, and one of the previous owners had underlined a lot of words. I didn’t think too much of this at first: there are often handwritten notes and underlined sections in second-hand books. That’s part of the appeal of second-hand books: the feeling that they’ve already had a full life (it must have been some journey to get from S&S Books in Sioux Falls, South Dakota, to Charlie Byrne’s Bookshop in Galway, Ireland), and the knowledge that someone else got to appreciate them. This case was slightly different though, because there were just individual words underlined, and no notes in the margins. I soon realised that these words were underlined because the previous reader hadn’t understood them. How did I come to realise this? Because I didn’t know most of them either. 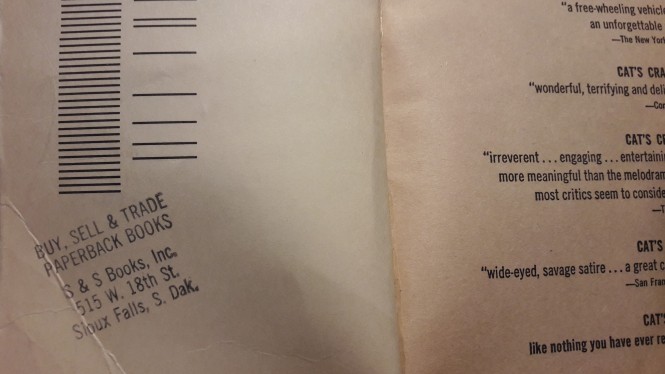 This didn’t feel too strange to me. Even though I’m a language nerd, and in the English-teaching industry, I always come across words I don’t know. As I know I mentioned in some other post, the Oxford English Dictionary contains 171,476 words that are currently in use. The average native-speaker adult has a vocabulary of between 20,000 and 35,000 words, so I guess I have a vocabulary of about 35,010 words. And that still leaves… lots of words that I don’t know. I’ve never felt that this was a problem. Usually when I come across a new word, it’s clear that it’s not one I need to know, or that it’s an obscure or archaic word (a nice example is the A Song of Ice and Fire books: so many new words to describe types of armour). And often I can figure out the meaning from the context (again, thanks to George R.R Martin, I now know that lobstered is an adjective to describe gauntlets, and it’s easy to picture what they look like).

But seeing those words underlined (and admiring the previous reader’s honesty with him/herself about what they didn’t know) made me reflect on how much I don’t know, and how much I should know. So here’s a selected list of those underlined words, with my thoughts, and whether I knew them or not, and if I could figure out their meaning:

And that’s everything. I don’t blame the reader for not knowing any of these, though I’m still a bit annoyed about reticule. At least I knew one meaning, but it didn’t make sense in the context. Did you know it means handbag? Looking back on those words though, it’s impressive how much one can understand something without knowing every word. Even though I didn’t know a lot of those words, it didn’t interrupt my reading flow. Either the meaning was clear from the context, or I didn’t know.

And that can be extended into language teaching. Of course you want a teacher to have a pretty good vocabulary, but apart from teaching at the highest levels, a teacher doesn’t really need to know a lot of obscure words. And even if you’re teaching an advanced or even proficiency class, you can check your materials beforehand and make sure you know them all. What’s more important, is the ability to explain words, or help students to figure out what they mean (and I think the latter is more important, as it’s more interesting for the students and makes things more memorable). And engaging students in the lesson is also very important. In fact, a teacher could even get away with not having the greatest ability to explain things, if they can get students interested in the lessons, and therefore the language.

And taking things back to the real world, if I had to choose between having a large vocabulary, and being able to figure out the meanings of words, I’d choose the latter. Though it’s a skill we all have, though not everyone puts it to the best use they can. So if you ever come across a word you don’t understand, don’t worry. You’re not alone, and there’s a good chance you’ll be able to figure it out from the context, and learn a new word. And then, as I’m going to do, you can use the word ithyphallic at every possible opportunity.