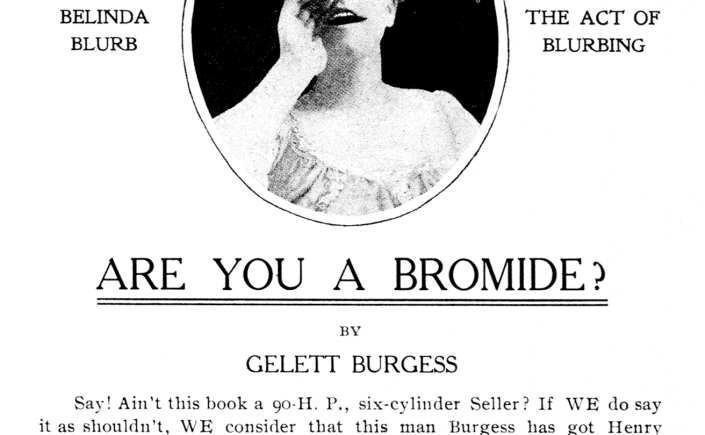 You may know that a blurb is any text on the back cover (or occasionally inside the dust jacket) of a book. The word is generally associated with quotes from authors or reviewers praising the book, but it can also refer to any text, like a plot summary, author biography, or information about the series the book belongs to.

It’s difficult to say what the first blurb was. It may have been the second edition of Walt Whitman’s poetry collection Leaves of Grass, published in 1856, which featured a quote by Ralph Waldo Emerson on the spine. It was another 50 years though, until the word blurb came into being. It was coined by the American humorist Gelett Burgess in 1907. He wrote a short book called Are You a Bromide? which was presented at a trade association dinner. For the occasion, Burgess wrote a promotional text, seen in the image above. He created the character of Belinda Blurb himself, and called the accompanying text a blurb, and the action blurbing.

And, well, that’s the joke. There’s no long etymological thread to follow. Presumably, Burgess just thought the word blurb sounded funny, and went with it. Maybe it is funny, but it doesn’t make me chuckle. Humour changes very quickly over time, and that’s very clear if you actually read Burgess’ blurb. 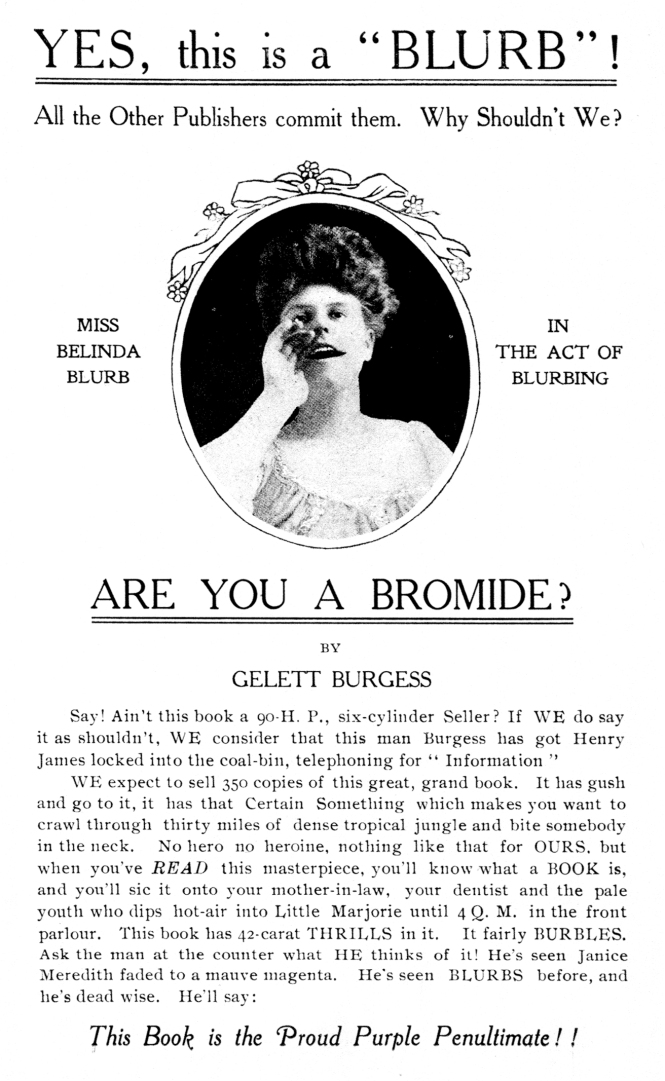 I’m curious though as to why the word took off. It might simply be because Burgess was relatively popular at the time, and the word became well known this way. Maybe it also just feels right. It certainly does for me, maybe because it reminds me of the word blurt (as in to blurt something out), so it makes me think of the person writing the blurb blurting out their praise for the book. Or, the reason is much more mundane. Maybe one person heard another use the word at some point in 1907, and assumed that that had always been the correct word. They then started to use it, as did their friends, and so on and so on, until it became the standard English word.

With so many different people using English in so many different ways, there’s a great variety of ways in which a word can become an everyday one. Sometimes it’s because the word has become established over thousands of years, thanks initially to its ancestor’s use in the Roman Empire, and continued use by powerful and prestigious organisations. And sometimes, it’s because someone thought up a funny word for a trade association dinner.