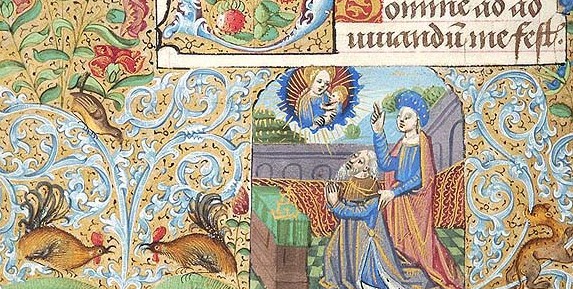 Not hard to spot the odd one out, eh? Forgetting about chicken for a moment, have you ever noticed that in English, we have special names for the most-commonly consumed meats, separate from the names of the animals themselves? Most other languages are content to use the same word for the animal and its meat, so why not English? Before looking at the answer, here’s a clue in the form of the English names for animals with their French counterparts:

Royalty and the aristocracy, however, usually only encountered these animals as meat, and were the only ones able to afford to eat such meat regularly. Therefore the French words for these animals came to be used in English to refer to their meat. Note how this doesn’t apply to animals not normally eaten in Britain: e.g. horseflesh, dogmeat etc. As the elites didn’t eat these animals, normally, their French names didn’t become associated with their meat.

What about venison and chicken then? Well, venison didn’t use to mean only deer meat. It comes from the Old French word venesoun, meaning meat of large game, which could be deer or boar, which were hunted frequently. I imagine that as wild boars became less common in Britain, deer became the main quarry of hunters, and deer meat became synonymous with venison. And the reason we say chicken instead of poulet or pollet or somesuch is because it was widely available to both rich and poor, and the Middle-English speaking commoners vastly outnumbered the French-speaking aristocracy.

And that’s why I like chicken: it’s a symbol of the power of the people. The rich and powerful have always had a disproportionate influence on the world based on their numbers. This goes for language too, but still, numbers ultimately win the day, and if the majority of people use a certain word, then that word gets to go in the dictionary. So while chicken might not have the same delicious flavour as a good steak, this humble bird gave its life again and again to the masses, so that they could survive the harsh medieval life, and because of that we use its humble, everyday Middle English name: chicken.

16 thoughts on “Chicken – The People’s Food”