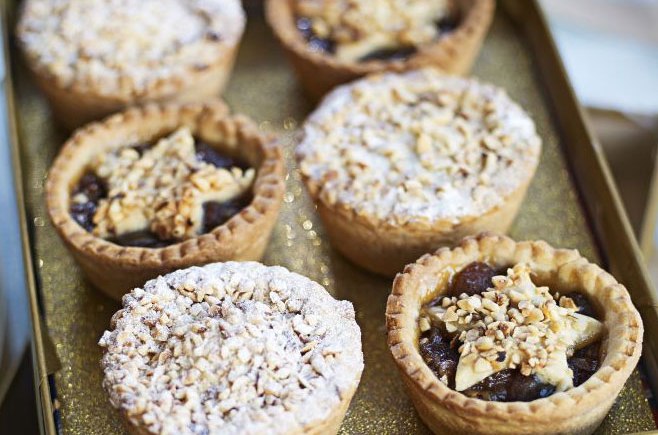 It’s Christmas Eve, and many of you, especially in the UK and Ireland, will be enjoying some mince pies today. If you’re unfamiliar with these delicious treats, they’re little sweet pies with a filling of dried fruit, jam, and spices. But no minced meat. What’s up with the name then?

Quite simply, mince pies originally did contain minced meat. The origins of the pie go back to medieval knights returning to Britain from the Crusades. They brough back a lot of dried fruit and spices, and pretty soon, these ingredients were being used alongside meat like lamb, beef, and mutton in Christmas pies.

Some claim that there was Christian significance in many of the original aspects of the recipe. The spices were apparently intended as a reference to the gifts of the Three Wise Men, and the 13 ingredients of traditional recipes were believed to represent Jesus and his twelve apostles.

By the 19th century, meat was dropped from most recipes, perhaps because people were already eating enough food over the Christmas period. As is so often the case though, the name stayed the same, as we tend to be quite conservative about changing the names of things.

The word mince by the way, is related to another word I looked at recently: minute. Its etymological chain can be traced back to the Latin minutus (small), from which we also get the word minute (and miniscule, diminish, etc). It makes sense, as minced meat is chopped into small pieces. The verb to mince, as in to walk delicately, is also related, as it involves taking small steps.

Whatever you’re eating this Christmas period, whether it be mince pies, turkey, or whatever, have fun!