I was reminded today of the term Third World. It was quite commonly used when I was a child, basically synonymous with developing world. I remember occasionally wondering as a child why we used the term (there’s only one world!), but it also feeling like it made sense. I think I was somewhen in my teens when I learned the answer.

You see, there were a lot more third-world countries than you might think. The term referred to any nations that were not aligned either to the NATO-led Western Bloc (the First World) or to the Soviet Union and the wider Communist Bloc (the Second World).

Most African and South-American countries fell into this category, but so did neutral and non-aligned European countries like Ireland, Switzerland, Sweden, Finland, and Austria. Here’s a full map of how the world was divided in 1975: 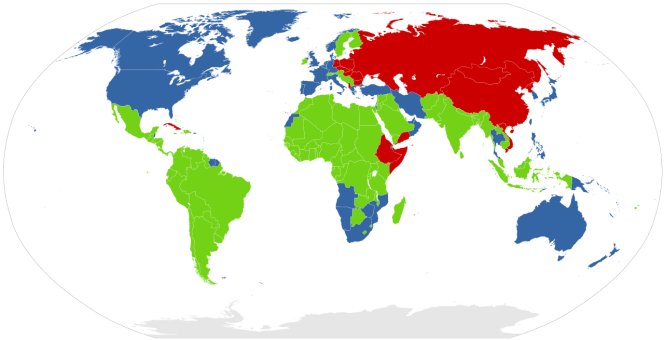 After the end of the Cold War, the term fell out of common usage, replaced by developing world or developing countries to refer to those less-developed countries generally associated with the term.

It’s interesting though that the term became so popular. Probably because it made people in the First World feel they were top of a hierarchy. Which explains why people like me who actually lived in, technically, third-world countries were never aware of that fact, and were happy to consider ourselves part of the First World. The best of the three, or so we assumed.

And it’s interesting that even though we never refer to the Second or Third World anymore, we still talk about the First World. Sure, it’s generally only now in terms of tongue-in-cheek “First-World Problems,” but it’s interesting that it’s used to talk about privilege, even in a knowing way. We still associate the First World with wealth and privilege. Even if we’re mocking ourselves for our privilege, aren’t we also simultaneously at least a little grateful that we have the privilege to be embarrassed about our privilege?

And don’t we perhaps remind ourselves of that privilege by reminding ourselves of this heirarchy of nations that was never really a hierarchy at all.