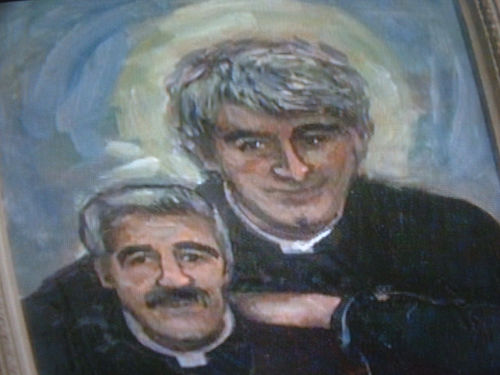 It’s Father’s Day today in many parts of the world. I hope you’re being well treated if you’re one of the men honoured by the day. You really never can have too many pairs of socks. Like Mother’s Day and Valentine’s Day, it’s quite an artificial day, but I don’t mind too much really, as sometimes maybe we need a little push to be grateful. Or to at least express our gratitude.

The word father, like mother, isn’t one we actually use all that much of course, instead preferring works like dad, pop, papa et al. These words, like so many of our words to refer to our mothers, are derived from our first babblings as a child.

The word father itself is derived from the Proto-Germanic fader, but this word did actually in turn come from the baby sounds which give us the more informal words for father. This doesn’t seem obvious, because of the clear difference between the P of pa and the F of father. What we’re looking at here though, is the classic example of Grimm’s Law. This is a pattern observed by the German grammarian Jacob Grimm, who noted that in certain Indo-European languages of German origin, certain consonant sounds undergo regular shifts. One of these is common shifts is from P to F, explaining why words derived from the sound pa developed into father. You can see this law in effect in other words, such as foot, derived from the root ped. We can still see the influence of this in foot-related words such as pedicure and podiatry.

What’s quite interesting is how we use the word father outside of the boundaries of family. It’s not surprising, because we view ourselves so much in terms of family, and often simply expand this view of ourselves and project it onto the wider world. That’s why we talk about father- and motherlands, and why towns are twinned with each other. We do seem to use father more often than other family-related words though. Given how so many societies throughout history have been patriarchal, it’s not surprising that the word father is often synonymous with authority. Nowhere is this more evident than in Christianity. The Christian god is usually referred to as Father, and considering how the Catholic Church, by far the biggest Christian denomination, doesn’t allow female clergy, it’s not surprising that God would be pictured as a father figure.

What struck me as unusual as a child was that priests also got to be called Father. It seemed a touch blasphemous to me (though the irony of celibate priests being called father didn’t strike me at the time). If I’d discovered then that the word pope (Il Papa in Italian) was derived from words for father, I wouldn’t have found it unusual. He’s one step away from God, and I don’t think most Catholics would mind looking up to him as a father figure. But priests? It always seemed a bit much. Little did I know that I wasn’t alone, and this is a question often asked in theological circles. It’s particularly vexing for some believers, because apparently Jesus said at one point to call no man father. Though I think the response of most theologians to this apparent problem is a fairly sensible one, seeing the word as referring to a priest’s fatherly duty to his flock. Though using both father and flock does seem like a curious mixing of metaphors, unless we’re to think of priests as rams.

On a lighter note (I know you all love theological etymology, but it’s good to take a break from it occasionally, so you can enjoy it more when you return to it), the word for father in another language apparently caused some confusion and spoilage for Star Wars fans, back in 1977 and 1980 when the first two films were released. This stems from the fact that (SPOILER ALERT!) Darth Vader is actually Luke Skywalker’s father. People were understandably shocked when they found that out while watching The Empire Strikes Back in 1980. But, the story goes, Dutch speakers weren’t surprised at all. They’d known all along you see, because vader is the Dutch word for father. George Lucas strengthened belief in this idea when he stated in a 2005 interview that he’d chosen Vader as the villain’s name because of its similarity to father, knowing all along that he was Luke’s father. It’s cute to think of Dutch speakers nonchalantly watching Star Wars in 1977 assuming that Anakin Skywalker and Darth Vader were one and the same, and that George Lucas had a plan from the beginning, but it all has a touch of the too-good-to-trues about it. I just find it hard to believe that between 1977 and 1980, all the Dutch speakers of the world kept this amazing fact to themselves, or were unaware that non-Dutch speakers would be shocked by this information. And looking around the internet, it does indeed seem too good to be true.

As is usually the case with films and TV in the Netherlands and Flanders, Star Wars was shown in cinemas in English, with Dutch subtitles, rather than dubbed. Darth Vader’s name was unchanged in the subtitles, which initially seems to strengthen the case for the story. But the Dutch word vader sounds quite different from the Vader in Darth Vader, with a similar A sound to the word cat, and a D that sounds more like a T. Plus, it seems that most Dutch speakers just assumed that George Lucas had chosen a cool-sounding evil sci-fi name that coincidentally happened to be spelled the same as their word for father. And, even if they had thought he’d chosen the word deliberately, why would they assume Vader was Luke’s father? Why not Han Solo’s, or Chewbacca’s? No, unfortunately it’s just a coincidence that Lucas chose Darth Vader as a cool name, and then after the first film decided to make the hero and villain father and son.

Finally, there’s my favourite thing about Father’s Day: the apostrophe. Naturally, an apostrophe is grammatically necessary in this case, but it would be possible to put it either before the S (singular, day of a/your father), or after the S (plural, day of fathers). It’s a small distinction really, but I think the fact that, officially, it’s singular, makes it feel a little more personal. Even if it is a pretty artificial day, it’s got that going for it at least.