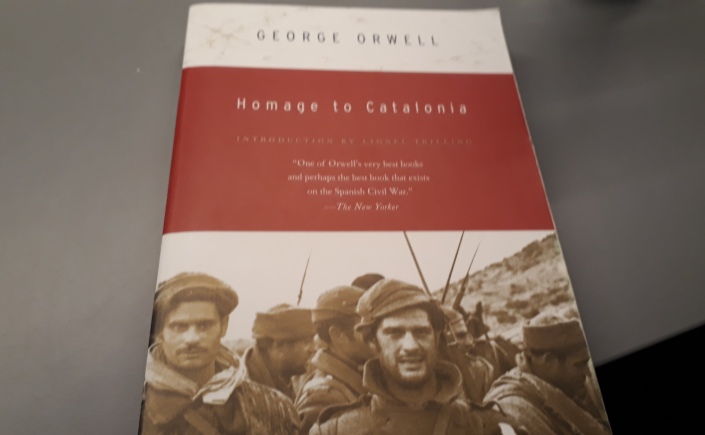 I was rooting through my George Orwell books this weekend, and realised that it had been a long time since I read his account of of fighting in the Spanish Civil War, and grabbed it. It was only today at work when I questioned whether the title was a strange one.

Was it A Homage to Catalonia?

Or An Homage to Catalonia?

A minor difference, perhaps, but also perhaps all the difference in the world.

Which one is right? Well, both could be, really. If I had to choose one, I’d go for An Homage. Remember when I wrote about the word historic? Remember when I said that words beginning with H with an emphasis on their second syllable usually sound more natural with an? Well going by that logic, an sounds better. But, that’s assuming you pronounce homage a certain way.

Specifically, that would be /ɒmɑ:ʒ/, with the emphasis on the /ɑ:/. To put it more simply, with a silent H, emphasis on the A, and with the second syllable being the same as in mirage. And that’s probably the more common pronunciation overall.

But you could pronounce it as /hɒməʤ/. Kind of like porridge, I suppose. Which is certainly less common than /ɒmɑ:ʒ/, but pronouncing it this way would require you to use an A beforehand.

Naturally, I then had to consider: which pronunciation would Orwell have used? Well, the silent H is closer to the original Norman word which the word is derived from, so in that sense it might be considered the more standard form. But then, pronouncing the H is more faithful to standard British-English pronunciation conventions, and became probably the more common pronunciation in British English. Also taking into consideration the fact that Orwell disliked affectation in writing, particularly in terms of using foreign terms, and I suspect that he preferred to pronounce the H.

With that decided, I made my way home, and you can imagine my surprise to arrive and find the title is:

Just goes to show it’s best not to overthink it sometimes!

3 thoughts on “Homage to Catalonia”