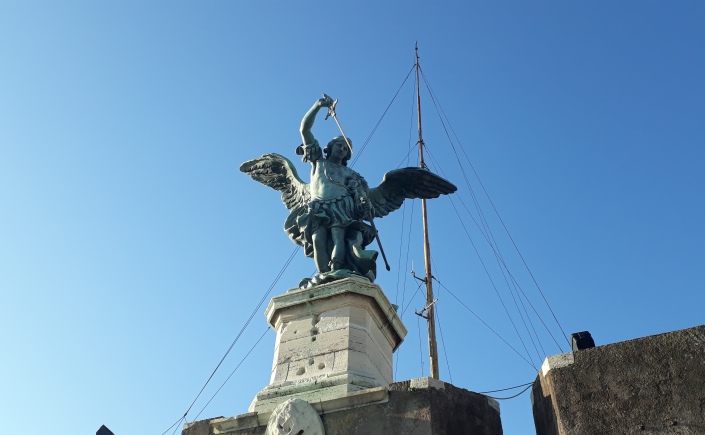 We’ve all asked ourselves that at some point, I’m sure.

I’m happy to say I’m back from my little trip to Rome and Naples, and though I switched my brain off as much as possible, I couldn’t help seeing a little inspiration here and there.

Oh, you might say excitedly, he’s probably been thinking about the etymologies of some famous Roman emperor’s names, or about how we still use words related to the Roman Empire with reverance. I bet he’s done some research on the word pontiff after visiting the Vatican. Two such great cities are sure to provide anyone inclined to write on any subject with an abundance of ideas!

So anyway, the gloomy dong.

The information in the sign in the below image can be found at the top of Castel Sant’Angelo:

This impressive structure can be found on the right bank of the Tiber, near the Vatican. It was originally built by the Emperor Hadrian as a mausoleum for himself and his family, and later converted into a fortress with lavish apartments by the Vatican. Of course what I’m most interested in is that first sentence, and it’s gloomy dong

Of course the gloomy dong is the sound of the Bell of Mercy, but the sentence doesn’t make that clear, does it? And that’s because that gloomy dong is dangling.

More precisely, the clause beginning whose gloomy dong… is a dangling modifier, something I touched on briefly before. You see, that clause is intended to modify the subject (the Bell of Mercy), but as the sentence also contains an object (the statue, of the Archangel Michael), it’s not grammatically clear which of the two the modifier refers to.

And the fact that it comes right after the statue is mentioned makes it seem quite like the sign is talking about the statue’s gloomy dong. Obviously a native speaker familiar with American genital-related slang wouldn’t have made such an error, but I think we can forgive a signwriter who innocently assumed dongs could only be related to bells.

Of course you’ll find understandable little errors like that whenever you go on holiday. Like this, from the Vatican Museums’ restaurant, which is pretty mild:

or my favourite, from a Roman bar…

How could you resist that!?

But nothing of course can compare to the mental image of an archangel’s gloomy dong announcing executions. It’s probably not the worst way to go.

3 thoughts on “Whose Gloomy Dong?”