Lovely, isn’t it? In Italian of course, it’s Napoli. And while the English and Italian names for the city are quite similar, I’ve often wondered: why does Naples have an S at the end of it?

I discovered the answer in The Vatican, of all places. Not in the secret archive or anything so interesting, but in The Gallery of Maps (La Galleria Delle Carte Geografiche), a beautiful corridor full of incredible topographic maps of various parts of Italy, commissioned in the 16th century (the maps were commissioned then, not the corridor itself: I’m aware that last phrase is bit of a dangling modifier). You can see a little bit of it in the background in the picture below, behind the herd of tourists charging blindly towards the Sistine Chapel and the inevitable disappointment that they can’t take pictures inside. 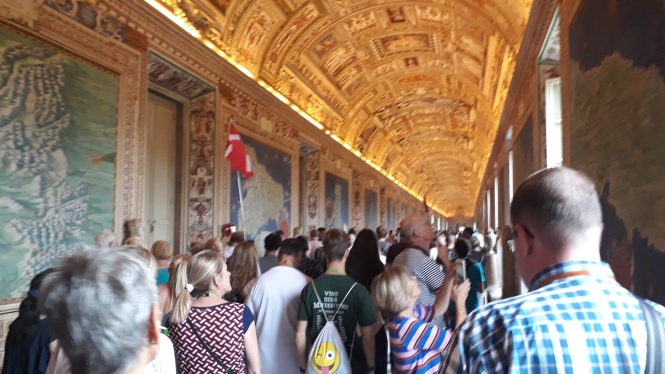 On one map I noticed that Naples/Napoli was called Neapolis. Ah, I thought, quite similar to both Naples and Napoli, so it’s easy to see how the two names were derived from it, especially considering the letter I is usually pronounced like ee in Italian.

If you’re a scholar of the Classics, you might be thinking that Neapolis sounds quite Greek. And it originally was a Greek name, meaning new city, as it was founded by Greek colonists.

If you visit Naples, I recommend you try pizza fritta (fried pizza) and frittatine di pasta (hard to translate, but also delicious and fried: they really like frying things in Naples). Head to Piazza Trieste e Trento. And maybe if you tell the etymology of Naples and Napoli, they’ll give you a discount.