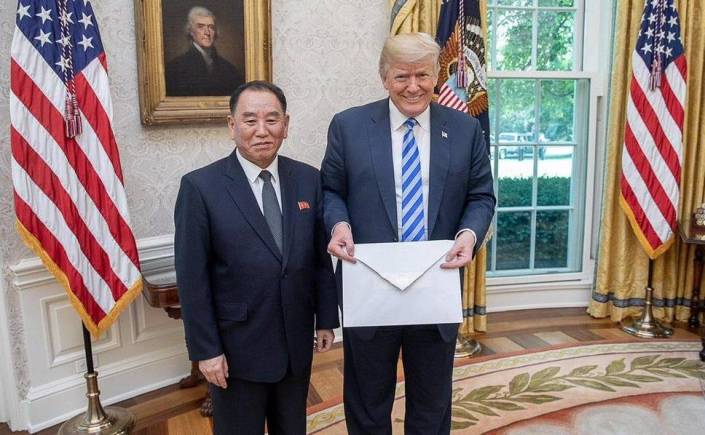 Look at him there. Look at his face. Look at how happy he is to have his big, important letter. The North Koreans really understand him perfectly: give him a really big letter, in a really big envelope, flatter him, make him feel important.

And of course, this being Trump, he talked about how nice the letter was, before stating a few minutes later that he hadn’t opened it yet. He lied, in other words. #FakeNews

Donald Trump says his letter from Kim Jong-un was “a very nice letter”.

Eight minutes later, he says he hasn’t opened it yet. pic.twitter.com/tLKS8ZBoES

Anyway, seeing him holding his big novelty letter, grinning like a schoolboy who’s been given a certificate for brusing his teeth five days in a row, got me thinking: letter is an interesting word, isn’t it?

Like so many words I’ve been thinking about lately, it’s got two pretty distinct meanings. There’s the letter you put in an envelope and send to somebody, but you also compose that letter using words made up of letters.

The exact origins of the word are unknown, but it seems like it referred to alphabetical symbols first. It more than likely comes from the Latin littera, meaning letter of the alphabet, and came to replace the native English bocstæf (literally book staff), via the Old French letre.

We can still see this in the way we can refer to literature as an academic discipline as letters (e.g. a man of letters). And of course literature also comes from littera. Even before letter entered the English language though, I imagine its Old French and Latin forebears came to be used in the singular form, rather than the plural, to refer to an epistle, simply because it surely seemed odd to people to use a plural word to refer to a singular object. I’m writing a letter makes more sense than I’m writing letters, doesn’t it?

And that’s why a letter is called a letter!