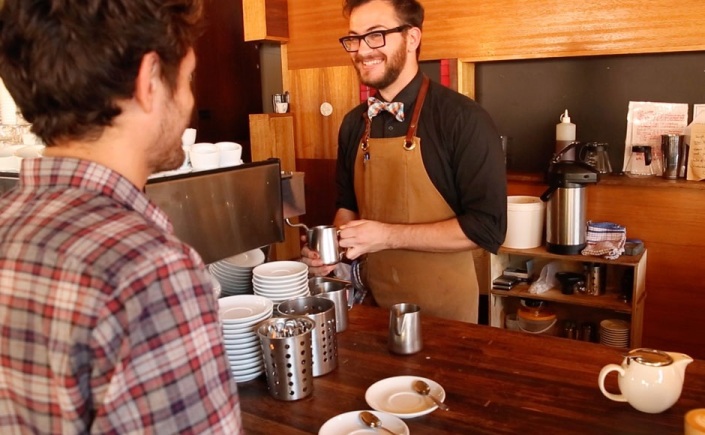 There are many things that annoy us about how others use our native tongue. That’s just the way our brains work. There’s one interesting example though, that’s often mentioned by British-English speakers: Can I get…?

If you speak American English, you’re probably faintly bemused at the thought that such a common phrase to make a request can be annoying. What else are you going to say when you want a coffee? In British English though, this is often seen as an Americanism recently imported to the UK and used with impunity by the Great British Youth.

As my English is mostly British English but with a healthy dose of American and an influence from the Irish language, I was surprised to learn that Can I get…? is so disdained by so many of my neighbours across the Irish Sea. I feel like I’ve always used both Can I get… and Can I have…, the latter of which is generally recommended as the “proper” way to request something.

On one level, disliking this phrase is simply the usual instinctive dislike of the use of another system of language which we see as threatening or replacing our own traditional one. It’s a basic conservatism that we all feel about something or other at some point. In fairness though, many of the phrases’ detractors also point out that they do see a logic to Can I have… that’s absent from Can I get….

It generally goes that Can I have… makes sense because that’s what you want: to have, to possess a coffee. Can I get… on the other hand, doesn’t make sense, because you’re not the person getting the coffee. The person working in the coffee shop is going to get the coffee and give it to you, so it therefore doesn’t make sense for you to ask if you can get a coffee.

However, while I understand that logic, I think there’s more than one way to look at this phrase. Can I get…, according to its detractors, means Can I go and get…, and that doesn’t make sense, because the coffee-shop employee is the one who’s going to go and get the coffee. But let’s take a step back for a moment and look at the verb to get. It’s something of a hot verb, in that it can have many different meanings depending on its context. Still, it has one general, common meaning which no-one could deny: to receive. And whether you say Can I have… or Can I get…, the end result is that you’ll receive, or get, a coffee. You don’t have to go behind the counter and start working the machine: when the barista gives you your coffee, you’re getting a coffee.

Of course the reason British-English speakers often equate Can I get… with Can I go and get… is because it’s quite common to say something like I‘m going to the shop to get some milk, which makes it sound like we’re solely responsible for doing the getting, that getting the milk equates to the whole process from leaving the house to coming back home with the milk. But of course the actual, literal getting is when you pay for the milk, at which point you’re getting it, and after that point you have it. In that sense, Can I get… is quite logical.

But: if you’ve disliked the phrase all this time, and don’t use it, then please continue to dislike it, and not to use it. We’re all tribal at heart in some way, and it’s hard to start changing our ways, especially when it comes to using language. All I’ll ask though, is that you consider that, even though you might have some solid logic behind why you use language, someone else might use language differently, based on their own system. And the world can accommodate different systems of logic. If it couldn’t, then we’d all speak the same way, and how boring would that be?